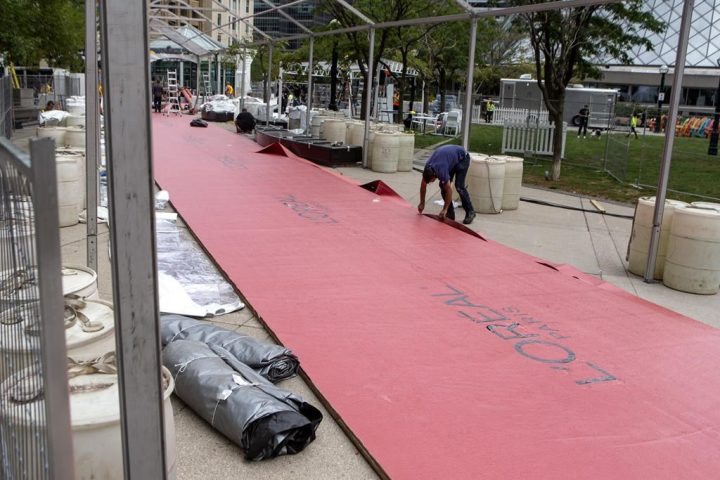 A red carpet is adjusted at Toronto’s Roy Thompson Hall on Wednesday, Sept. 7, 2022, ahead of Thursday’s start of the 2022 Toronto International Film Festival.

The Toronto International Film Festival is rolling out the red carpets for what organizers pledge will be a return to form after two years of pandemic-disrupted events.

With 200 feature films and 50 shorts on the roster, TIFF CEO Cameron Bailey said the fest will serve as a reminder of what local cinephiles once had, and what they can have again.

Bailey will help kick off the festivities Thursday evening at Slaight Music Stage on King Street West — also known as festival street — where Buffy Sainte-Marie is set to perform.

Red carpets are back at TIFF, but big questions loom about the future of cinema

The opening night film is Netflix’s “The Swimmers,” which is based on the true story of two sisters’ flight from war-torn Syria, directed by Sally El Hosaini.

The Welsh-Egyptian director has been selected for the TIFF Emerging Talent Award, one of the pre-announced prizes handed out at the festival.

Also receiving Tribute Awards are Brendan Fraser, the Canadian-American lead actor in Darren Aronofsky’s “The Whale,” and the ensemble cast of “My Policeman,” which includes pop star Harry Styles. Both films are screening at the festival.

Other celebrities scheduled to attend this year are Oprah Winfrey — who produced “Sidney,” the documentary about Sidney Poitier — and Taylor Swift, who’s presenting a screening of her short film “All Too Well.”

Bailey said the opportunity for star spotting will be one of the ways this year’s festival returns to normal.

“We’re expecting just about all the people who are involved in the movies we invited here to the festival to be here to launch their films,” he said.

Local businesses expect TIFF sales boost, but not as high as pre-pandemic years

“I’m expecting people to look amazing, and for the audiences to just be thrilled when they’re in the same room with some of their favourite actors and directors.”

Daniel Craig will be joined by his co-stars in “Glass Onion: A Knives Out Mystery,” including Kate Hudson and Janelle Monáe.

Al Yankovic, the parody musician, and Daniel Radcliffe, the actor portraying him in “Weird: The Al Yankovic Story,” are both on deck, as is Jennifer Lawrence, who plays a soldier sent home from the Afghanistan war in “Causeway.”

Meanwhile, the legendary director Steven Spielberg is set to make his TIFF debut this year with the premiere of “The Fabelmans,” a semi-autobiographical film about a teen who learns of a shattering family secret just as he discovers the power of cinema.

The star-studded schedule marks a shift from last year’s festival, which featured roughly half as many films and operated with a hybrid model.

Crowds weren’t allowed to gather around the red carpets, screenings were held outdoors and at drive-ins, and many films were available to stream online across Canada.

This year, indoor theatres are back at full capacity and only a couple dozen films are available virtually.

TIFF said it expects attendance to be back up to pre-pandemic levels, with about 1,400 media members and 3,500 industry participants registered for the event that runs until Sept. 18.

But those who can’t attend in person will be able to follow some of the festivities online, said Shay Thiyagarajah, partnerships manager with Twitter Canada.

Red carpets at Roy Thomson Hall will be livestreamed on the platform, as will the “In Conversation With…” series and the industry panels.

“Our role is all about driving conversation on the festival, allowing Canadians to engage beyond what they’re seeing on Festival Street,” she said.