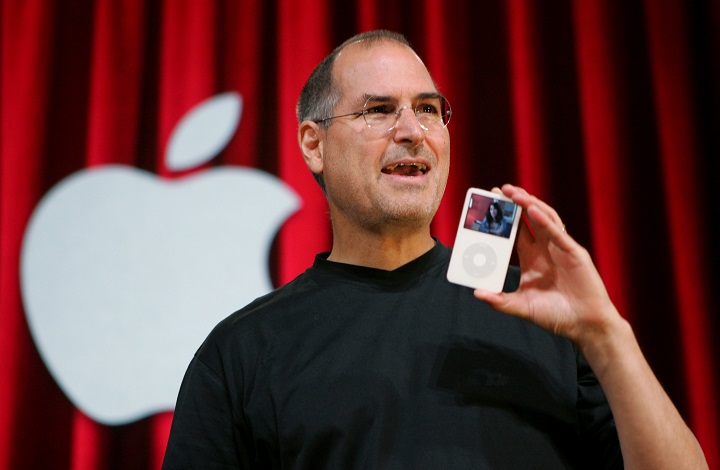 In the summer of 2001, a screenwriter friend got a call from his agent. “You and your writing partner get on a plane to San Francisco. You’re scheduled for a meeting at One Infinite Loop.” Apple headquarters? What could Apple want with a couple of writers whose specialty was children’s programming?

After a short wait in the lobby, a familiar figure in a black turtleneck and jeans came up to them. “Come with me,” he ordered. Steve Jobs then ushered the two into a conference room whereupon he went into full presentation mode. “This,” he said, “is going to revolutionize everything about music.” He reached into his pocket and pulled out a pre-production model of the very first iPod.

Jobs told my friend and his partner that he wanted them to come up with a promotional video featuring some hand-picked world-renown artists. It would be the world’s introduction to the new device. And for the next several weeks, my friend worked on the project, often getting calls from Jobs at all times of the day and night with notes.

In the end, production and marketing schedules conspired to sink the project and the promotional video was never made. Apple was on a super-accelerated development timeline (serious work really began on the iPod in May 2001 and Apple wanted it out before Christmas). Still, my friend had a front-row seat to the launch of one of the most important pieces of consumer electronics in the history of the universe.

The first generation iPod appeared on Oct. 23, 2001, and would eventually sell somewhere near 400 million units. It not only turn Apple’s fortunes around for good but set it on the road to becoming a company worth more than US$2.5 trillion. Yet how many stories have you seen in the last couple of weeks about this important anniversary? Not a lot. The iPod, as important as it was, has been eclipsed (or more correctly, cannibalized) by the iPhone.

The world was still in the lingering fog of the 9/11 attacks when the press was called to a low-key event at Apple HQ. After speaking of Apple’s “digital hub” strategy — an idea that one’s digital lifestyle would centre around a Macintosh computer — he rhapsodized about a new product that connected a person with music in a new way.

“We love music, and it’s always good to do something you love,” said Jobs at the hour-long presentation.

Apple, he said, had created a new device capable of offering “1,000 songs in your pocket.”

He then reached into his jeans and pulled out a white slab about the size of a deck of cards.

That first iPod, with its 1.8-inch 5GB hard drive sourced from Toshiba, could indeed hold about a thousand MP3s at a 160-kilobit rate. Songs could be loaded quickly via a new thing called FireWire; transferring a whole CD’s worth of music might take 10 seconds. It had a 10-hour battery life that could be charged to full capacity in an hour. It also offered “20-minute skip protection,” something that seemed pretty magical for a digital device at the time.

Songs were accessed through a series of nesting menus accepted by a big click wheel that, unlike future versions, physically turned. It was so easy to use, it could be operated with one hand.

Jobs demonstrated all the iPod’s new features. And the first song to be played from an iPod in public? Building a Mystery from Sarah McLachlan.

“With iPod,” said Jobs in the accompanying press release, “Apple has invented a whole new category of digital music player that lets you put your entire music collection in your pocket and listen to it wherever you go. With iPod, listening to music will never be the same again.” List price: US$399 (about $750 in Canadian dollars today).

Reporters that day each went home with their own iPod along with Steve’s favourite 20 CDs so everyone could experience the ease with which iTunes and the iPod worked together.

Jobs needed a hit — a grand slam, in fact. And at the time the iPod came out, Apple’s future was extremely shaky. In the second quarter of 2001, the company lost US$195 million. To say that the company had bet the farm on the iPod is not an understatement.

And the initial public reaction was tepid. Some commentators said that it was too expensive, over-hyped, and nowhere as revolutionary as Jobs was making it out to be. The iPod wasn’t the first MP3 player to hit the market — a couple of South Korean companies had entered the space three years earlier — but it had a couple of big advantages. First, it was intuitively easy to operate. Second, it was supported by iTunes, Apple’s vastly superior digital music marketplace and CD-ripper, which had launched in January 2001.

And any doubts that it was special evaporated the first time you handled one. It worked smoothly, felt good in your hand, and fit nicely in a pocket. And in a stroke of brilliance, the included headphones were white. If you saw someone walking down the street with white earbuds, you knew that they had an iPod.

Then came the TV commercials created. This was the very first one.

They were later followed by the famous silhouette ads designed by Susan Alinsangan at Apple’s agency, Chiat/Day. Once again the white earbuds were highlighted. This was the first one from 2003.

In that run-up to Christmas 2001, Apple sold 125,000 units — nice, but not what the company needed. It was until the third generation iPod appeared in April 2003 — a new, slimmer design with an all-touch interface and storage of up to 40 GB — that things really took off.

Then came the Mini (my personal gateway drug into the Apple ecosystem and the first with flash memory) in January 2004; the Shuffle in January 2005; Nano in September 2005; and the Touch in September 2007. At one point, there was an iPod for every need, every person, and every occasion more than two dozen different iterations. Sales were so insanely good that not only was  Apple saved but the iPod pivoted the company away from being just one that sold computers into a consumer electronics empire.

The 100 millionth iPod was sold sometime in 2007, the year in which iPods accounted for 25 per cent of all sales. By the end of the year, Apple’s revenue was US$24 billion with US$15.4 billion in cash and zero debt. In a quarterly report in January 2008, Apple said iPod sales were responsible for 42 per cent of all revenue. The company would go on to sell more than 54 million units that year.

The competition was thoroughly crushed. At one point, iPods had over 90 per cent of the market for hard-drive-based digital music players and over 70 per cent of the entire market. The iTunes Music Store had 70 per cent of worldwide music sales. Its success forced the entire music industry to reassess how music could be distributed, sold, and consumed. For example, it accelerated the shift from listening to full albums to individual songs. The playlist became the thing. If you’re lamenting the long, slow death of the album, then look no further than the rise of the iPod and iTunes.

Steve Jobs was right: The iPod changed everything about music.

But then another pivot. On June 29, 2007, Apple introduced the iPhone, which was really an iPod Touch with a cell phone built-in. By Q3 2009, iPods sales had entered an unstoppable decline as everyone migrated to the new iPhone. Apple stopped breaking out iPod sales in its financial reports by the end of 2014.

You can still buy an iPod, but there’s only one model to choose from: the seventh-gen Touch, which hasn’t been updated since the spring of 2019. And with the explosion of streaming music services (including Apple Music), who needs to have 160 gigabytes of music in their pocket? And yeah, 400 million units seems like a lot until you realize that the iPhone has sold north of 2.2 billion.

Still, it’s impossible to understate the changes and progress wrought by the iPod. But you would have thought that there might have been a bigger celebration when it came to its 20th birthday.

—
Alan Cross is a broadcaster with Q107 and 102.1 the Edge and a commentator for Global News.