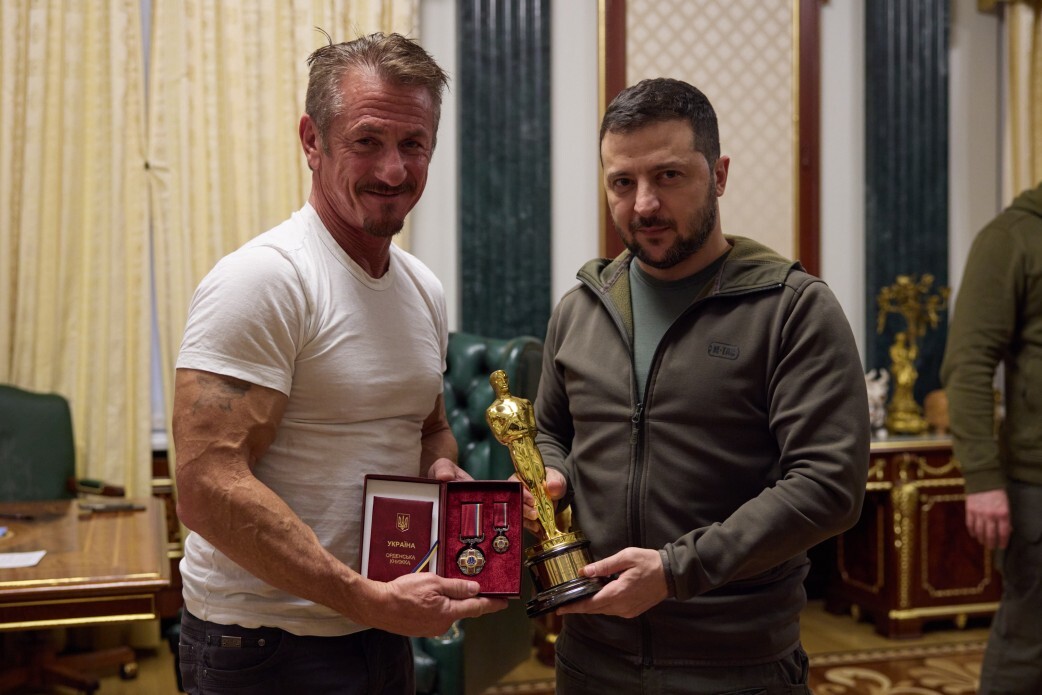 Hollywood actor and film director Sean Penn (R) meets Ukrainian President Volodymyr Zelenskyy (L) as he hands over his own Oscar statuette to the Ukrainian president in Kyiv, Ukraine on Nov. 8. Penn is holding Ukraine's Order of Merit, which he was awarded by Zelenskyy.

In a video of the meeting posted to Zelenskyy’s Instagram account on Tuesday, Penn revealed the statuette to the president and insisted he take the coveted prize.

“I feel terrible,” said Penn, 62. “It’s just a symbolic silly thing, but if I know this is here with you then I’ll feel better and stronger for the fight.”

“When you win, bring it back to Malibu, because I’ll feel much better knowing there’s a piece of me here,” he added.

This was Penn’s third trip to Ukraine since Russia invaded the country in February. He has been a vocal advocate for Ukraine and a staunch supporter of Zelenskyy since the start of the war.

In his Instagram caption, Zelenskyy called the Oscars statuette “a symbol of faith in the victory of our country.”

Penn has two Academy Awards for Best Actor in a Leading Role from Mystic River in 2003 and Milk in 2008.

Hollywood actor and film director Sean Penn (R) meets Ukrainian President Volodymyr Zelenskyy (L) as he hands over his own Oscar statuette to the Ukrainian president in Kyiv, Ukraine on Nov. 8.

Zelenskyy also presented Penn Ukraine’s Order of Merit. The president made sure to specify that the award is not from him, but rather “from Ukraine.”

The pair then walked through the streets of Kyiv where Zelenskyy revealed a plaque in the ground bearing Penn’s name, signature and the date of Russia’s invasion of Ukraine, Feb. 24, 2022.

The plaque is a part of the Walk of the Brave, which Zelenskyy described as a place where “present and future generations of Ukrainians will remember those brave people who have stood with Ukraine from the very beginning.”

“There are three places in the world that all the pride of my life will be,” Penn said while standing over the plaque. “The place where my daughter was born, the place where my son was born and this.”

3:33
Ukrainians use candles at dinner, hand out hot lunches as country faces blackouts

In March, Penn threatened to publicly “smelt” his Oscars if Zelenskyy — who was an actor himself — was not permitted to speak at the 2022 Academy Awards. Though Zelenskyy did not speak at the event (and Penn did not destroy his statuettes), the Ukrainian president gave a speech at this year’s Grammy Awards.

In his pre-taped address, Zelenskyy urged entertainers and viewers at home to speak about the Russia-Ukraine invasion and fill the silence of war with music.