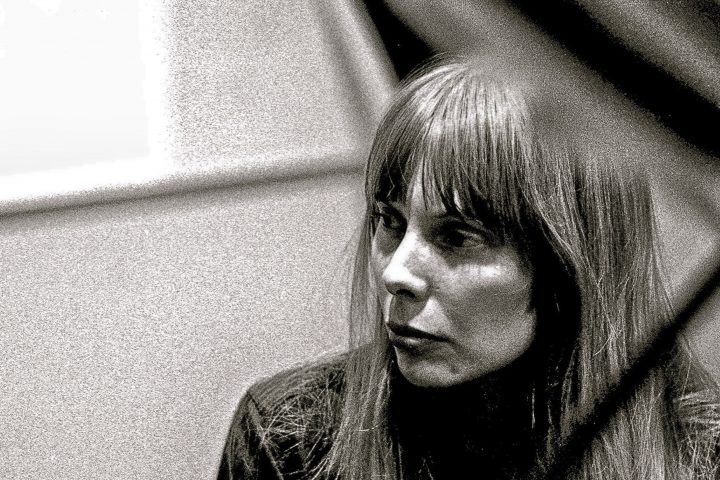 Musician Joni Mitchell recording her first album "Song to a Seagull" at Sunset Sound Recorders in 1967 in Los Angeles, California. An Ottawa drummer's estate has now revealed a rare recording of Mitchell by Jimi Hendrix in 1968.

An Ottawa drummer with a passion for collecting reel-to-reel tapes deserves applause for the coming release of a Joni Mitchell performance recorded over half a century ago by none other than virtuoso guitarist Jimi Hendrix.

The impromptu 1968 recording session of blossoming singer-songwriter Mitchell at the national capital’s Le Hibou Coffee House has long been the stuff of pop music lore, documented in Hendrix’s diary.

But the tape’s fate was a mystery for decades.

Mitchell announced this week that selections from the Ottawa gig would be included on a volume of archival recordings from 1968-71 to be released in October.

A 24-year-old Mitchell was in the middle of a two-week stint at Le Hibou on March 19, 1968, when Hendrix, playing the nearby Capitol Theatre, phoned the Alberta-born songstress, whom he would soon dub “fantastic girl with heaven words” in his diary.

“I think I’ll record her tonight with my excellent tape recorder (knock on wood) … hmmm … can’t find any wood … everything’s plastic,” he wrote.

In liner notes from Mitchell’s forthcoming release, posted on her website, she recalls the evening vividly.

“They came and told me, ‘Jimi Hendrix is here, and he’s at the front door.’ I went to meet him. He had a large box. He said to me, ‘My name is Jimi Hendrix. I’m on the same label as you. Reprise Records.’

“He said, ‘I’d like to record your show. Do you mind?’ I said, ‘No, not at all.’ There was a large reel-to-reel tape recorder in the box.

“The stage was only about a foot off the ground. He knelt at the edge of the stage, with a microphone, at my feet. All during the show, he kept twisting knobs.”

The resulting tape was stolen from a vehicle a short time later. Hendrix died in 1970. And it seemed Mitchell’s show would linger only in the memory of those who came out to Le Hibou.

More than 30 years later, drummer Richard Patterson, who had played in Ottawa band The Esquires, asked fellow musician Ian McLeish to digitize more than 300 tapes he had amassed over the years.

“Some were tapes sent to him by artists trying to get on the air, some were tapes of the groups and the artists he’d been involved with. And some were just tapes that he found hanging around in the studios,” McLeish said in an interview.

After Patterson’s death in 2011, his estate asked McLeish to go through the old recordings again.

3:10
Re-imaging the music of Joni Mitchell

“And I found a bunch of tapes Richard hadn’t given me the first time. And one of them was Joni Mitchell at Le Hibou, March 1968, taped by Jimi.”

McLeish digitized the tape, and the original, along with all the others from Patterson, were given to Library and Archives Canada.

“But I kept the digitized versions of everything,” said McLeish, who releases vintage Canadian recordings through Mousehole Music.

“And I was hoping that this Joni thing might be of interest to somebody someday. But I didn’t really think, being an old tape, that it was that important.”

McLeish heard last year that Mitchell had begun issuing some early performances. “And I said, well, this would be right up her alley.”

He got in touch with the performer’s management and sent along the digital file.

“They passed it on to Joni and, from what I understand, she freaked out. She had thought this stuff was lost forever, and so was really, really pleased to hear this set.”

McLeish said he looked into retrieving the tape from Library and Archives because Mitchell expressed interest in having the original, but COVID-19 restrictions complicated matters.

Richard Green, now retired from the archives, was manager of the music section when Patterson’s tapes were offered to the institution. He recalls accepting them even though there was a freeze on such acquisitions at the time.

“I essentially took it upon myself to bring the material in when I wasn’t supposed to, and to hide it away in the backlog.”

A full inventory was not done at the time, so Green didn’t know the Mitchell tape was among the recordings.

The mystery is how it got into Patterson’s collection in the first place, McLeish said.

“I don’t really know, because Richard’s gone now, how he got a hold of it. But I assume because he was always picking up tapes and adding them to the collection, either somebody gave it to him because they knew he was archiving stuff. Or he saw it somewhere and said, ‘Hey, can I take this?”‘