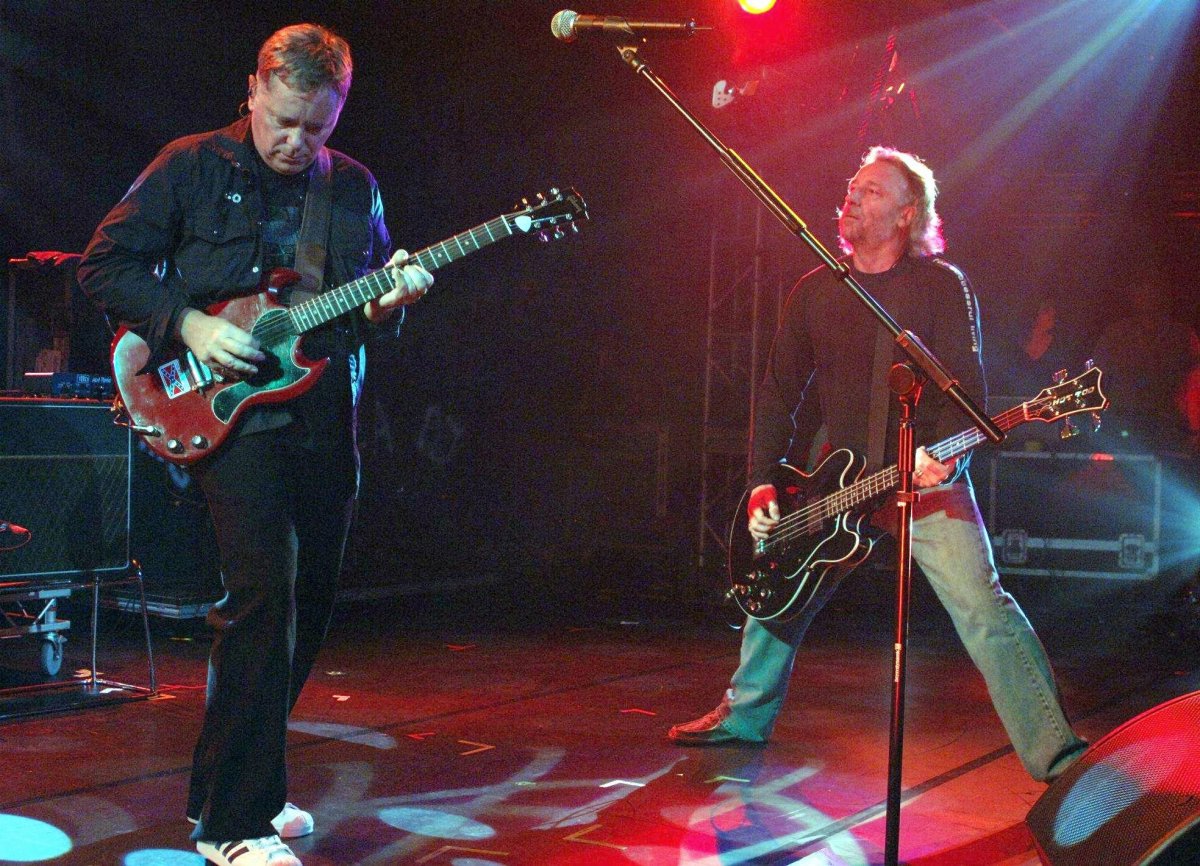 New Order perform onstage in 2005. If you had gone to the show, would you have worn the band's T-shirt?.

The problems began as soon as Roz showed up for a round of drinks before a New Order concert. She appeared at the table wearing a vintage “New Order Substance 1987” T-shirt. Julia was the first to pounce.

“Uncool!” she exclaimed, aghast. “Shirt-to-show faux pas! You’re not supposed to wear a band’s T-shirt to a show featuring that band! That’s terrible form. It looks like you’re trying too hard. Rookie error! You need to go home and change.”

Roz was nonplussed. “What? I can’t show my support and my years-long love for the group? I kept this 30-year-old T-shirt in pristine condition specifically for nights like this!”

They both looked at me. Where did I stand on the shirt-to-show debate? I stammered something non-commital but was saved by the people at the next table who had opinions to express the matter — and on both sides. Then the waitress got involved. An hour later, nothing was resolved but at least no tables were toppled.

Turns out there are a series of (mostly) unwritten rules about when to wear band T-shirts, who can wear them, and why. The proper etiquette has never been standardized, which means that it’s easy to run afoul of someone’s interpretation of these rules.

First, a few facts about such shirts.

According to a recent survey conducted by a T-shirt company in the U.K. — yes, it’s another one of those promotional campaigns disguised as a study/news story; the British are great at those — the average music fans own 11 music-related T-shirts. Metal fans are the kings of the shirts with at least 17 in the drawer or dresser. Punk fans spend the most on shirts with an average layout of US$600. (Note to Roz and Julia: About 21 per cent of the people in the study say that shirt-to-show wearing is wrong.)

I also found this interesting: 69 per cent of the people in this survey say they still own their oldest shirt, perhaps from the first concert ever attended. The average age of those old shirts is 11 years, which is pretty impressive considering that the quality of this merch isn’t always the greatest. Unless you really take care of them, seams fray, colours fade, and the printing flakes off.

In fact, vintage shirts in proper condition are extremely hot with AC/DC, Queen, and Aerosmith being particularly popular at thrift shops, used clothing stores, and markets like eBay. How much? Five hundred dollars for a nearly pristine 40-year-old shirt isn’t uncommon. I had a buddy who wore a powder blue Van Halen World Vacation Tour shirt from 1979 right up until the day he died a few years ago. He loved that shirt and cared for it like a newborn baby.

T-shirt sales at concerts are an essential part of an artist’s income stream. At an Iron Maiden show a couple of years back, I watched as two 53-foot semi-trailers rolled in, each packed to capacity with T-shirts. By the end of the show, they were almost empty. An industry insider once told me that it wasn’t uncommon for Justin Bieber to sell $350,000 worth of merch at every single show.

And had it not been for the T-shirts sporting the logo designed by Arturo Vega back in 1975, The Ramones would have gone broke during their years in the wilderness through the 1980s. Back then, wearing a Ramones T-shirt was like displaying a secret handshake to a fellow cult member. But by the 1990s, The Ramones had been recognized as the pioneers they were and everyone started wearing their logo. They sold far more T-shirts than records during their lifetime and still generate millions in income each year through this one piece of merch.

With that kind of interest in this particular type of clothing, you can understand why rules began to coalesce around how these shirts should be used.

Fans in the U.K. survey agreed that anyone who wants to wear any band T-shirt needs to know at least 10 songs from that artist. Anything less and you were a newbie at best and, at worst, a complete poseur, a fake, an imposter. You should never wear a shirt for a band that (a) you don’t listen to and/or (b) not a fan of. They point to fashionistas and social media selfie-takers who wear Ramones or Metallica or Motorhead shirts because they think it makes them look cool or perhaps because they just like the logo.

I conducted a highly unscientific Twitter poll on the matter. Around 34 per cent agreed that you should be able to name more than 10 songs before you’re allowed to legitimately and without hypocrisy wear an artist’s official T-shirt. But over 35 per cent said it didn’t matter if they knew a single song. “I wear what I want” was the sentiment.

Here are a couple of other “rules” about band T-shirts gleaned from a variety of sources.

I did not invent any of these rules. I’m just reporting. Next time you choose a band shirt to wear, know that you could end up being judged, silently or otherwise.