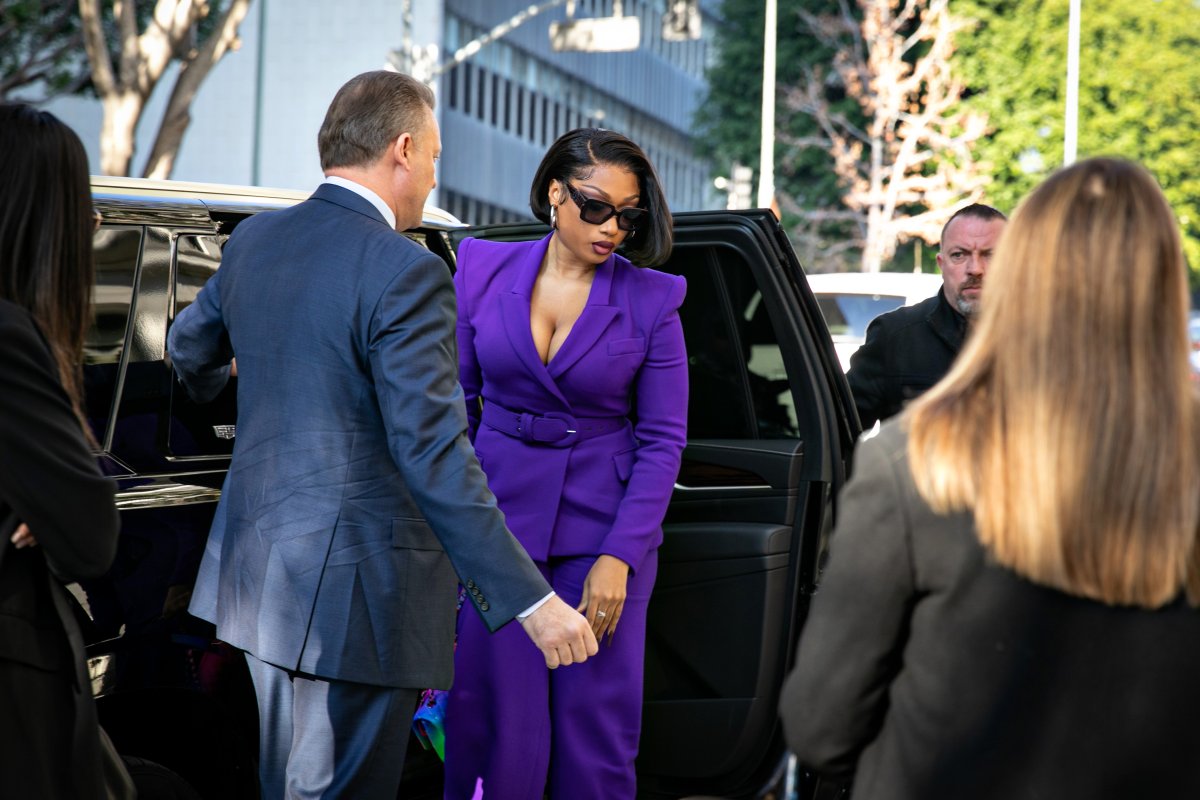 Megan Thee Stallion arrives at court to testify in the trial of rapper Tory Lanez for allegedly shooting her on Tuesday, Dec. 13, 2022 in Los Angeles.

Megan Thee Stallion spent an emotional four hours on the stand, delivering testimony on Tuesday in the trial of Tory Lanez, who has been accused of shooting the popular rapper after a Los Angeles party in 2020.

The Savage rapper, whose real name is Megan Pete, provided an in-depth account of the alleged shooting, which left her with bullet fragments in her feet.

While dressed in a stylish purple suit, Pete, 27, told the courtroom that she regrets speaking about the shooting publicly.

“I wish he would’ve just shot and killed me if I knew I was going to have to go through this torture,” Pete said of Canadian-born rapper Lanez, whose real name is Daystar Peterson.

The shooting occurred after Pete, Peterson, Peterson’s bodyguard and Pete’s former friend Kelsey Harris left a party at Kylie Jenner’s Los Angeles home in July 2020. Pete testified an argument between her and Peterson spurred the shooting.

Pete claimed that Peterson, 30, was upset because she had asked to leave Jenner’s party early. When Peterson allegedly revealed to Harris that Pete and Peterson had a sexual relationship, the situation escalated, she said. She testified Peterson called both women a derogatory word and began to bicker about their musical careers.

When Pete asked to be let out of the vehicle, she claimed Peterson fired a gunshot as she walked away and shouted “Dance, b—h!”

Peterson has denied ever shooting Pete. Instead, his lawyer George Mgdesyan told the Los Angeles court a jealous argument between Pete and Harris inspired the shooting. Though Mgdesyan did not say Harris shot Pete (a long-since-held theory among staunch Peterson supporters), he claimed Peterson’s DNA was not found on the weapon.

Peterson has been charged with assault with a firearm, illegal weapons possession and negligent discharge of a gun. If convicted, the Brampton, Ont.-born rapper will face more than 22 years in prison.

While fighting back tears, Pete was questioned by both county prosecutor Kathy Ta and Mgdesyan.

Ta showed the courtroom police bodycam footage of Pete hobbling on bloodied feet out of a black vehicle. She is later seen in the back of an ambulance, crying heavily.

“I can’t believe I have to come in here and do this,” Pete said on the witness stand.

After the shooting, Pete claimed that Peterson offered her and Harris US$1 million each to not report the shooting to police, according to the Los Angeles Times.

Pete had initially stayed quiet about the shooting. She testified on Tuesday that the killings of George Floyd and Breonna Taylor made her, a Black woman, feel unsafe talking to the LAPD.

Peterson was later arrested on a concealed weapons charge.

Jay Leno ‘got a full face of gas’ in fire that burned his face, chest and hands

When Pete did finally report Peterson to the police, she did not disclose that she and the rapper had been in a sexual relationship. Tuesday was the first time Pete has publicly confirmed she and Peterson had been intimate.

When Mgdesyan pressed Pete as to why, she replied: “How could I share my body with someone who would shoot me?”

It is unclear if Peterson will testify during the trial, which is expected to last eight days.

Also in 2020, Pete spoke during an Instagram livestream and publicly accused Peterson of shooting her. The accusation poured gasoline on the already existing flames of speculation among hip-hop fans on social media.

Ever since, two separate pro-Pete and pro-Peterson camps have formed both on and offline.

In court on Tuesday, Pete said the public backlash to her claims has been “torture.” She specifically referenced the plethora of male rappers who have sided with Peterson.

Even Drake made reference to the shooting in the 2022 track Circo Loco, where he implied that he did not believe Pete’s claims.

Outside the courtroom, a group of fans were seen with “We stand with Megan” signs, banners and T-shirts.

Supporters rally in support of Megan Thee Stallion outside of the courthouse. Stallion whose legal name is Megan Pete, will testify in the trial of Rapper Tory Lanez for allegedly shooting her on Tuesday, Dec. 13, 2022 in Los Angeles.

“This whole situation in the industry is like a big boys club,” Pete testified. “Like I’m telling on one of y’all friends, now you’re all about to hate me.”