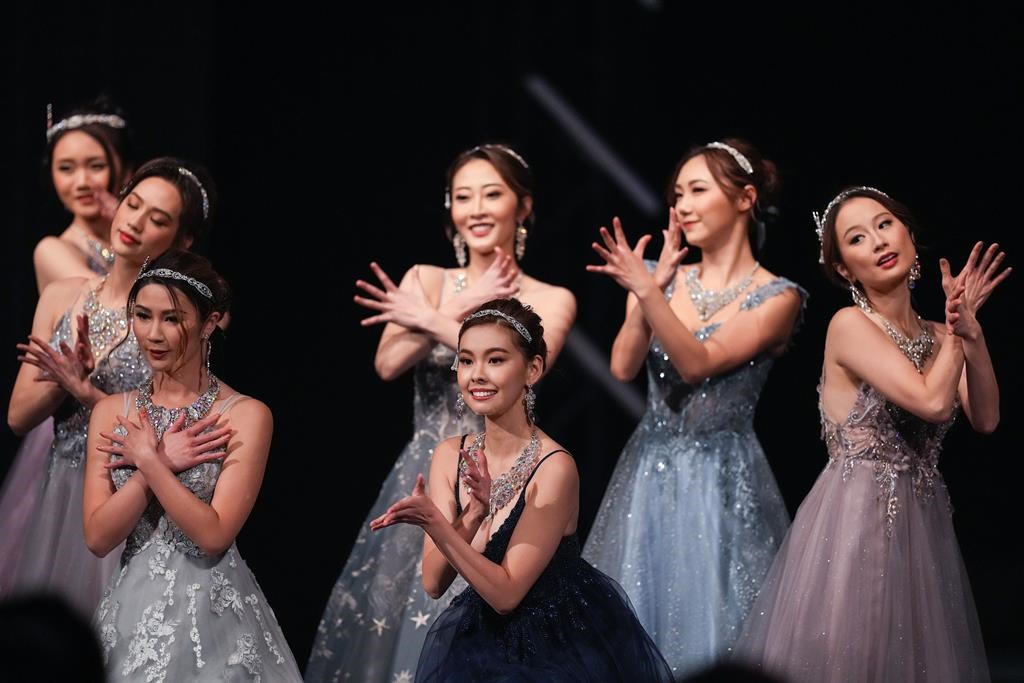 Competitors, including eventual winner Yi Yi Wang, front centre, dance during the Miss Chinese Vancouver Pageant, in Richmond, B.C., on Wednesday, November 30, 2022. The popularity of the 27-year-old pageant is testament to both the ongoing lure of celebrity in Hong Kong and Chinese show business, and what one expert calls the "aura" surrounding Canadian Chinese entertainers across the Pacific. Vancouver has long served as a source of talent for the Hong Kong and mainland Chinese entertainment scenes, and the mutual attraction persists in spite of recent political tensions between Canada and Beijing. THE CANADIAN PRESS/Darryl Dyck.

The eight women lining up to take questions included a pediatrician, a legal assistant and a piano teacher.

But standing on stage in their bikinis at the River Rock Casino in Richmond, B.C., they had one goal — to become the next Miss Chinese Vancouver.

The popularity of the 27-year-old pageant is a testament to both the ongoing lure of celebrity in Hong Kong and Chinese show business, and what one expert called the “aura” surrounding Chinese Canadian entertainers across the Pacific.

Vancouver has long served as a talent source for the Hong Kong and mainland Chinese entertainment scenes, and the mutual attraction persists in spite of recent political tensions over the crackdown on dissent in Hong Kong and allegations of Chinese political interference in Canada.

Dance teacher Yi Yi Wang, 19, who was announced the winner of the pageant on Dec. 3, hopes to become an actor and environmental activist.

Far from being deterred by political tensions, Wang thinks her education at the University of British Columbia, where she is studying for a degree in international relations, can be turned into an advantage in the Chinese film industry. She’s also open to opportunities in the West.

“I am someone who grew up in China and studied in Vancouver, so I am very aware of both cultures and don’t think there is a conflict in me pursuing entertainment anywhere else because my final goal is to connect people from all over the world together,” said Wang, who started taking part in pageants at the age of 15.

The pageant, arranged by Fairchild TV, plays a key role in identifying talent for Chinese-language show business. Past winners who found fame and careers in Hong Kong as singers or actors include Bernice Liu who won in 2000, Eliza Sam who won in 2009, 2011’s Erica Chui, and 2012’s Gloria Tang.

Wang said she also has her sights set on the Miss Chinese International title.

“For now, I would like to continue my work as Miss Chinese Vancouver to represent the city by doing more volunteering work and giving back to my local community,” she said.

“They are taller, beautiful and they speak English so well. Many people (in China and Hong Kong) feel: ‘wow, they are just so fantastic,’” said Law, an associate professor at the School of Music at UBC who recently helped organize a Cantopop, or Cantonese pop music, song contest for students.

“There is a kind of an aura around the Chinese Canadians and sometimes, even though their Cantonese and Mandarin are not that perfect, or even a bit off, people still find them very cute and attractive.”

Hong Kong entertainment enjoyed strong connections to Vancouver in the 1980s and 1990s, when stars such as Cantopop idol and actor Leslie Cheung moved to Canada, but Law said the link dates back much further.

Law said a “transpacific entertainment network” existed among the Chinese-speaking diaspora a century ago.

Laws traced the connections back to the 1920s when Cantonese-speaking musicians from Hong Kong and Guangzhou in southern China would travel by ship to perform in Vancouver, where their musical talents bloomed.

She said the phenomenon persists, with Hong Kong music industry figures travelling to Vancouver to both absorb the local entertainment culture and share their knowledge. Hong Kong acts continue to enjoy strong support when touring to Vancouver, Law said.

Cantopop boy band Mirror was in Vancouver this month to promote the new season of King Maker, a reality TV show that seeks to identify Chinese pop idols from among a group of North American contestants, many from Vancouver.

“It’s not surprising to see Mirror coming to town because we have the audiences here and we always have the entertainment business network,” said Law.

“What we see now is basically the continuation of the same kind of network.”

She hopes to sign with an entertainment company to further a music career.

She’s more worried about how her Mandarin will stand up in a Chinese environment than political concerns. Mandarin is mainly spoken in mainland China, while Cantonese predominates in Hong Kong.

“If (my career) is in Asia, I feel like I would have a little bit of a harder time because of my Mandarin,” said Jan.

She said she also worries about leaving family and friends behind in Canada.

B.C. school board apologizes for 1922 segregation of Chinese students

Not all the Miss Chinese Vancouver contestants see a future in show business.

Second runner-up Dr. Nicole Tanner, 27, was a pediatrician in Hong Kong, where she also performed standup comedy. She managed to combine both fields in a public awareness campaign about colon cancer, in which she dressed up in “poo” costume.

As much as she loves being on stage, Tanner’s next goal is to get a medical licence in Canada. She immigrated just three months ago and has no immediate plans to return to Hong Kong.

What if someone offered her a multimillion-dollar showbiz contract in China or Hong Kong?

“It’s not about the money,” said Tanner. “It’s more about what I think fulfills you, and for me, the most important thing is I go to work every day happy, and I wake up every morning excited to go to work. And that’s what being a pediatrics doctor has given me, so I could never give that up.”

Tanner, whose mother Maur Yeung was a Miss Hong Kong contestant in 1991, said she joined the Vancouver pageant for the challenge and to make friends.

Law said the Hong Kong and Chinese entertainment industries were “cautious and alert” to geopolitical changes.

She said the transpacific entertainment industry connections would persist, regardless of any tensions.

“You know, some of my students told me that their parents immigrated here in the 1980s and 1990s. They grew up listening to Leslie Chueng even though they didn’t speak the language,” said Law, adding that the music created an intergenerational bond.

“The community is not fading, it’s not declining. It’s actually expanding.”

2:02
Security guard attacked in Vancouver’s Chinatown returns to work, but not for long

This report by The Canadian Press was first published Dec. 17, 2022.

This story was produced with the financial assistance of the Meta and Canadian Press News Fellowship.