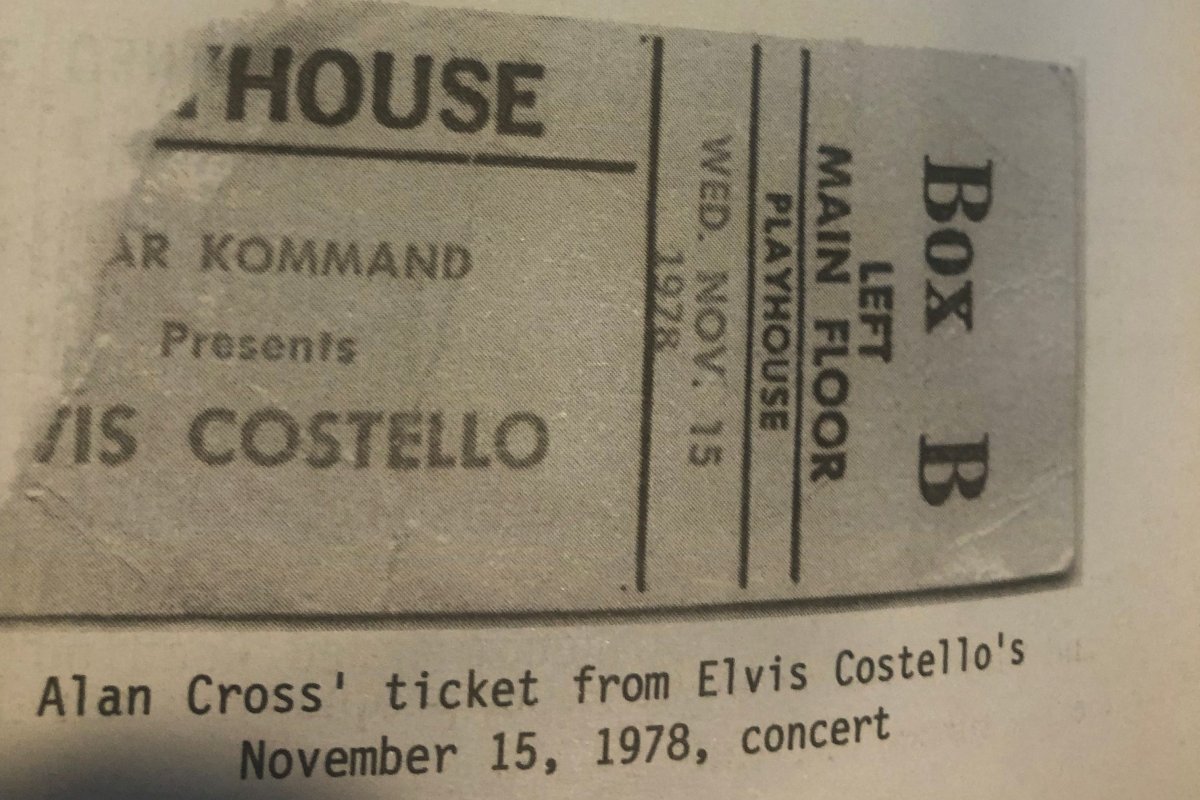 A couple of years back, a buddy and I made a trip to New York to see a Yankees game. When we popped up out of the subway near the stadium, I asked him for my ticket. That’s when it got complicated.

I learned that the Yankees no longer believed in paper tickets. I had to download the Ticketmaster app and then engage in a weird dance of ask-permission-grant-access with my friend’s phone which held two digital tickets. It was a clunky process and rather non-intuitive, but I eventually got my ticket to display correctly on my iPhone and I was able to show the barcode to the guy at the gate. Frankly, it was a bit of an ordeal, but if the Yankees were doing it, then it was obvious that I’d seen the future.

“Cool,” I thought. But I was also annoyed because it meant that I wouldn’t have a souvenir ticket stub from my Yankee experience.

Ever since my first concert — KISS with guests Cheap Trick at the Winnipeg Arena on July 21, 1978 — I’d kept the stub from every show I’d ever attended. I began by carefully taping them to the wall in my bedroom, eventually creating a timeline of my live music experience. By the time I moved out, there were dozens of stubs in a series of vertical rows: KISS, Rush, Elvis Costello, Aerosmith, The Eagles, Goddo, more Rush, Van Halen, Nazareth, Cheap Trick, Trooper, Supertramp, still more Rush, and a series of festival tickets.

People would marvel at my wall. “Have you really been to all these shows?” they’d ask. To which I’d reply. “Yep. I’m a concert-goin’ freak.”

Each stub was a story in itself. In those days in Winnipeg, you bought tickets at Attractions Box Office (ABO), Celebrity Box Office (CBO), the box office at the venue (Winnipeg Arena, Playhouse Theatre, the Convention Centre, etc.), or from a cool record store like Autumn Stone. All purchases required trips through time and space — no online selling back then! — and were almost always bought with cash. They needed to be stored somewhere safe until the day of the show. In the weeks leading up to the show, you might take them out of the envelope and gaze at them in anticipation of the gig. And each ticket told a story.

There was the time I was so awed by seeing Elvis Costello at the Playhouse Theatre on Nov. 15, 1978, that I waited outside the stage door to meet him after the show. I have an extra un-torn ticket from a Yes show on April 30, 1979, that was supposed to go to a girl, but she turned me down. Imagine how I felt next to that empty seat when I saw her on the floor with another guy.

I was with a group of friends who lined up on the sidewalk overnight in the spring of 1981 to get Styx tickets only to lose our place in line when the crowd stampeded toward the doors at 9 am. Getting heatstroke on a tarp-covered field waiting for Heart to appear at a festival called August One on (naturally), Aug. 1, 1981.

Those experiences and many, many more were memorialized by those stubs on my bedroom wall.

When I left home, I carefully peeled each stub off the wall, gingerly removed the tape, and put everything in a shoebox, vowing to keep collecting such things, and promised myself that one day I’d give them all a proper display, maybe in a giant picture frame like I’d seen some do. And I kept saving my ticket stubs for years, even after my radio gig began getting me into shows without hard tickets.

The paper in that box was a physical record of my musical journey. In an era before the internet and sites like Setlist.fm, this was how you kept track of your concert-going life and maturing (or not) as a music fan.

But then somewhere around the turn of the century, I started to get careless, probably because (and I don’t mean to brag here) I was put increasingly put on a guest list rather than given a hard ticket. When I did need to flash some paper, it was more often than not a barcode that I printed out from an email. Not very collectible, you know?

As the world became more digital and scalping/counterfeiting/theft became more of a problem, hard tickets started disappearing. Some anti-scalping measures involved tying a ticket to your credit card that you’d have to swipe upon entry to the venue.

And not long after that, after, we end up with me and my buddy outside of Yankee Stadium trying to figure out how to work the Ticketmaster app.

Post-pandemic, storing tickets on smartphones is becoming more and more popular as Ticketmaster, venues, and promoters try to sell tickets that are more secure and digitally tied to the actual purchaser. Festivals now rely on RFID bracelets that you activate online and then tap to get in. And until the public started freaking about potential privacy breaches, a number of companies were working on facial recognition technology. (“No more piece of paper! No more bracelets! Your face will be your ticket!”)

Perhaps you know of someone with one of these shoeboxes. The last time I looked at my collection, many of the tickets had faded to the point where they couldn’t be read. A few had disintegrated into off-white pieces of nothing. I really should have kept better care of them like a few friends who did the picture frame thing. One has his ticket stubs pressed between two panes of glass that form a lovely coffee table.

Collecting concert ticket stubs will soon be extinct, much like the notion of B-sides, liner notes, and album artwork. Instead, our memories will be preserved as selfies taken at our seats or video recordings of the gig that we never watch. Yes, there are T-shirts, programs, and an endless supply of tchotchkes at the merch tables, but they all cost money. A ticket stub came with its own memories built into the cost.

The last hard ticket I’ll probably ever collect is for a U2 show at Luzhniki Stadium in Moscow, on August 25, 2010, a hologram-adored thing that could be used as a skateboard in a pinch. That one didn’t go in the box. It’s in a frame by itself on the wall.

Meanwhile, I’ve put that shoebox someplace very dry and safe. I’ll get those stubs in a frame. One day.