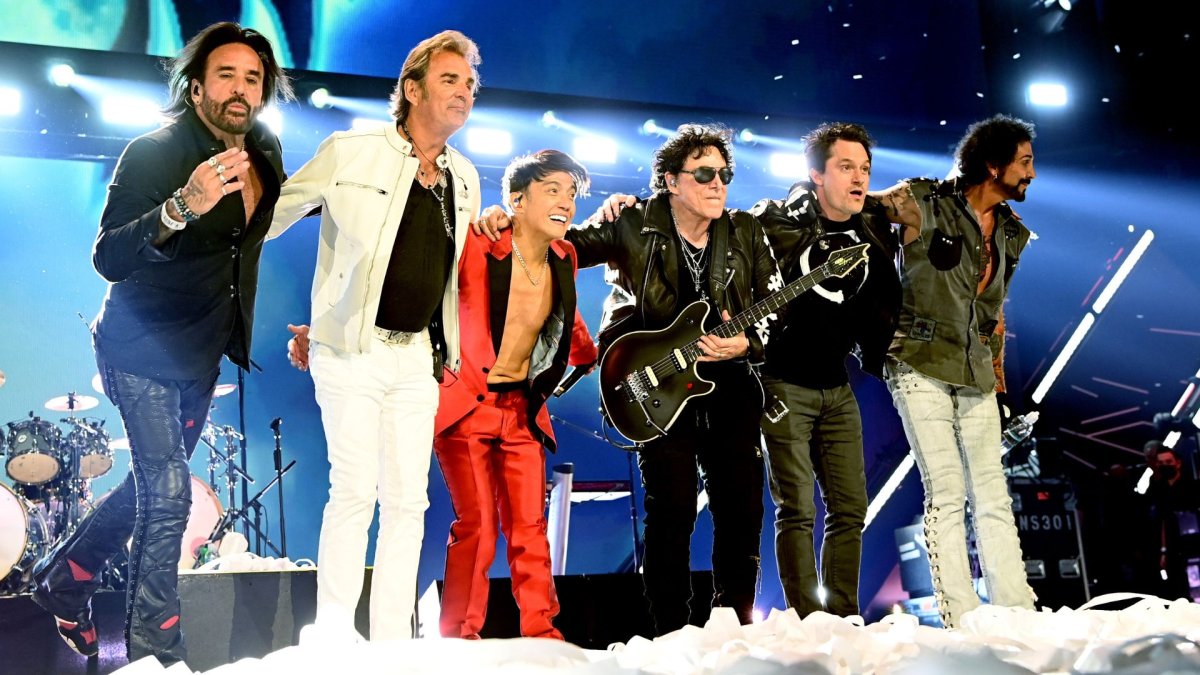 Some songs become political anthems over time, but a Journey band member has made it clear he doesn’t want Don’t Stop Believin’ to become one.

In November, Cain, 71, sang the song while playing the keyboard on stage at the America First Policy Institute’s Experience and Gala. A chorus of several Republicans dressed in formal attire sang along, including Marjorie Taylor Greene, Kimberly Guilfoyle and Kari Lake.

The cease-and-desist letter insisted Cain “has no right to use Journey for politics.”

Cain’s wife, Paula White, is an American televangelist and “spiritual advisor” to Trump.

Schon, Cain and the band’s former lead singer Steve Perry are the original writers of the 1981 song Don’t Stop Believin‘.

“Although Mr. Cain is free to express his personal beliefs and associations, when he does that on behalf of Journey or for the band, such conduct is extremely deleterious to the Journey brand as it polarizes the band’s fans and outreach,” Schon, 68, argued in the letter. “Journey is not, and should not be, political.”

Schon claimed Cain’s use of the song at Republican party events is “harmful” to Journey’s brand.

“His politics should be his own personal business. He should not be capitalizing on Journey’s brand to promote his personal political or religious agenda to the detriment of the band,” the letter continued.

The relationship between Cain and Schon was already strained; a spokesperson for Cain said that “Schon is just frustrated that he keeps losing in court and is now falsely claiming the song has been used at political rallies.”

Earlier this year, Schon filed a lawsuit against Cain that claimed he was denied access to an American Express credit card used by Journey. Cain then accused Schon of charging more than US$1 million in “improper personal expenses” to the band’s card. The pair continues to argue the issue both publicly and in court.

In the cease-and-desist, Schon and his lawyers argued Cain’s use of Don’t Stop Believin‘ at a Republican event “has the band’s fans up in arms.”

The sentiment is evident on social media. One Twitter user wrote that “Journey’s been dead to me since Cain’s support of Trump came out.” Another fan said, “using Journey’s music for a Trump event is an insult.”

Schon claimed Cain’s use of the song will impact the “earning potential” of Journey, “especially in light of the forthcoming tour.”

On Thursday, Schon tweeted that Journey had long ago decided not to be political.

“You just don’t go there as you will lose fans,” he wrote. “To me music is for the whole world.”

It was agreed to from the get go with Herbie Herbert way before JC. It’s simple, you just don’t go there as you will lose fans. To me the music is for the whole world 🌎 no segregation.

He also claimed Schon’s statement about “losing in court” is false.

“His statement is a lie,” Schon wrote Monday. He said the issue will be heard in court in February 2023.

His statement is a lie. We’ve not really been to court yet. I filed an ex parte to try to speed things along but judge did not feel it was a life or death matter. It is scheduled to be heard in Feb. I didn’t lose actually last time I won & Jon Benefited by it.

Journey is not the only band to complain about their music being used for Trump’s political campaigns. In 2020, The Rolling Stones threatened legal action against Trump for the use of their music at his rallies.

Don’t Stop Believin‘ is one of the most beloved classic rock songs of all time. The song resurged in popularity several decades after its release when it was featured in the final episode of The Sopranos in 2007. And in 2009 the song took on new life when it was included in the first episode of the popular TV show Glee.