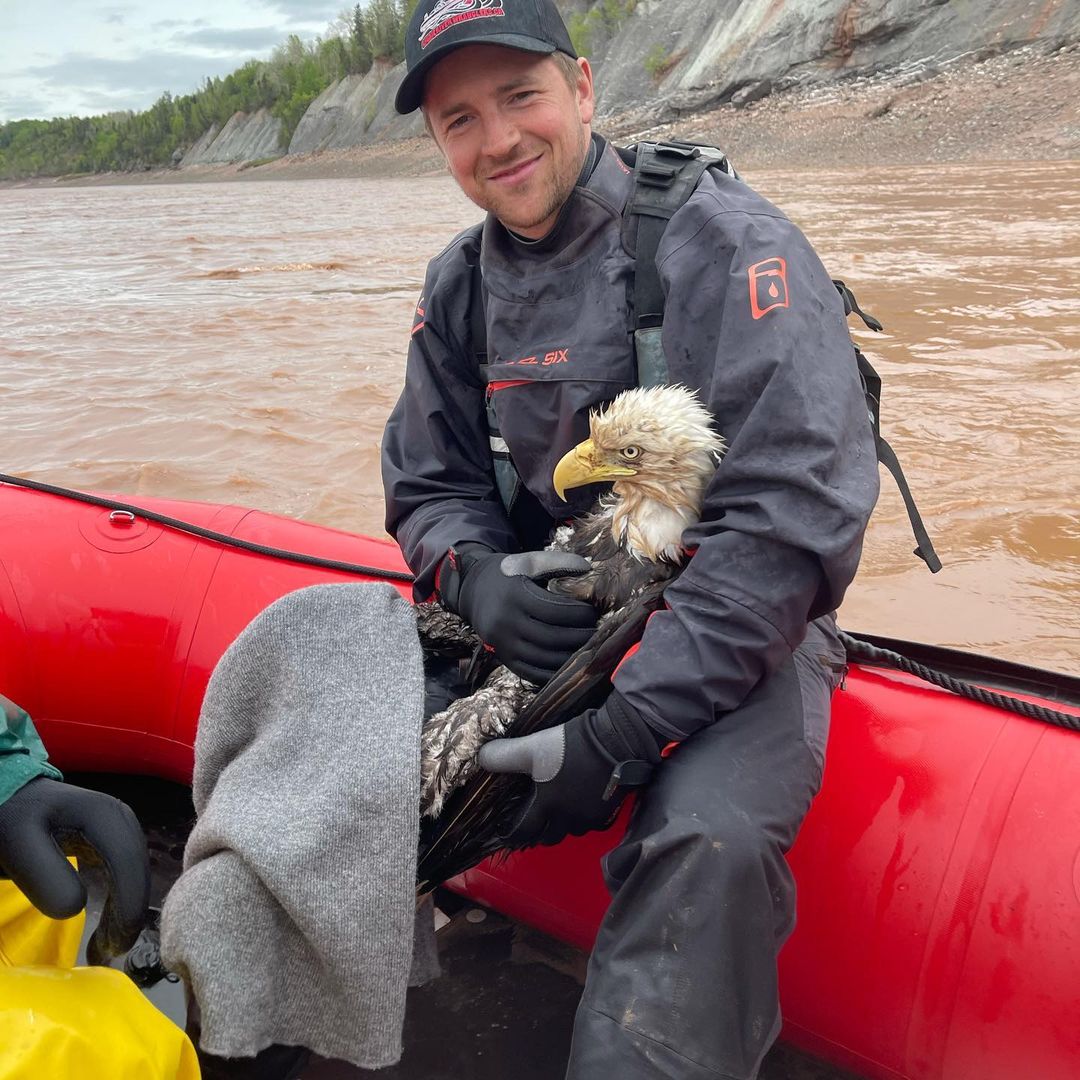 A Nova Scotia tidal bore rafter who’s long admired bald eagles from afar got up close and personal with one after rescuing it from the Shubenacadie River over the weekend.

As an owner and tour guide with the Shubie River Wranglers, Emmett Blois is no stranger to seeing eagles, many of whom live and hunt near the fish-filled river. But he never thought he would someday hold one of them in his lap.

“I’m still amazed,” said Blois, who also competed on the first season of Big Brother Canada, as well as the fourth season of The Amazing Race Canada.

Neither of those competitions nor his years of experience riding the tides of the Shubenacadie River could prepare him for what he came across on Sunday.

That day, Blois, along with some tour guides and trainees, went out on the river for the first time of the season. They were at the mouth of the river, about a nine-kilometre trek from the River Wranglers lodge, when they noticed six eagles on a nearby sandbar.

The eagles weren’t an uncommon sight — “we see them every day out there,” said Blois — but when a tidal bore started to roll in, five of them took off, while one of them stayed behind.

Blois says the eagle was mostly well-behaved on the way back to shore.

At first, Blois thought that the bird might have stuck around to catch a fish from one of the waves.

“And then the tidal bore came across and hit him, and he started flapping around and swimming in the water,” said Blois, noting the bird “definitely wasn’t a great swimmer.”

The crew leapt into action and got the boat close to the eagle. Blois and one of the trainees were able to carefully get it out of the water and into the boat.

“Typically, saving eagles isn’t part of training, but they definitely got a special first day, that’s for sure,” he said.

While he doesn’t know in what way the eagle was injured, Blois said one of its legs appeared to be swollen. He also suspected something might be wrong with one of its wings, since it didn’t take off with the rest of the birds.

The animal rehabilitation organization Hope For Wildlife is now looking after the eagle.

The journey back to the lodge took about an hour, but the eagle was well-behaved on the trip.

“My hand was kind of on his chest, and when we first got him in the boat, his heart was just pounding,” said Blois. “And then towards the end of the trip his heart rate had slowed down.”

Still, he wasn’t taking any chances.

“Obviously, I tried to keep my face a good distance from him, just in case,” he said, taking note of its sharp beak and large talons.

Once they got the eagle back to shore, they called the animal rehabilitation group Hope for Wildlife, which picked it up that day.

Blois said the organization will X-ray the bird to figure out the extent of its injuries, then treat it in-house. Then, it will be released back into the wild at the Shubenacadie River.

Blois says he sees eagles almost every day, but he’s never been this close to one.

Blois hopes the animal will come home soon, and even put a call out to his Instagram followers for potential eagle names.

“’Wrangler’ is a front-runner, lots of people are going for that, but we’ll see,” he said, adding that they want to be sure of the bird’s gender before settling on a name.

Blois said he’s grateful for the opportunity to help an animal that has long been a “huge, huge” part of his river tours.

“To be able to get that up close and personal, and be able to kind of help out, was an amazing experience. Amazing.”

1:12
Rehabilitated bald eagle released back into wild in Peterborough area