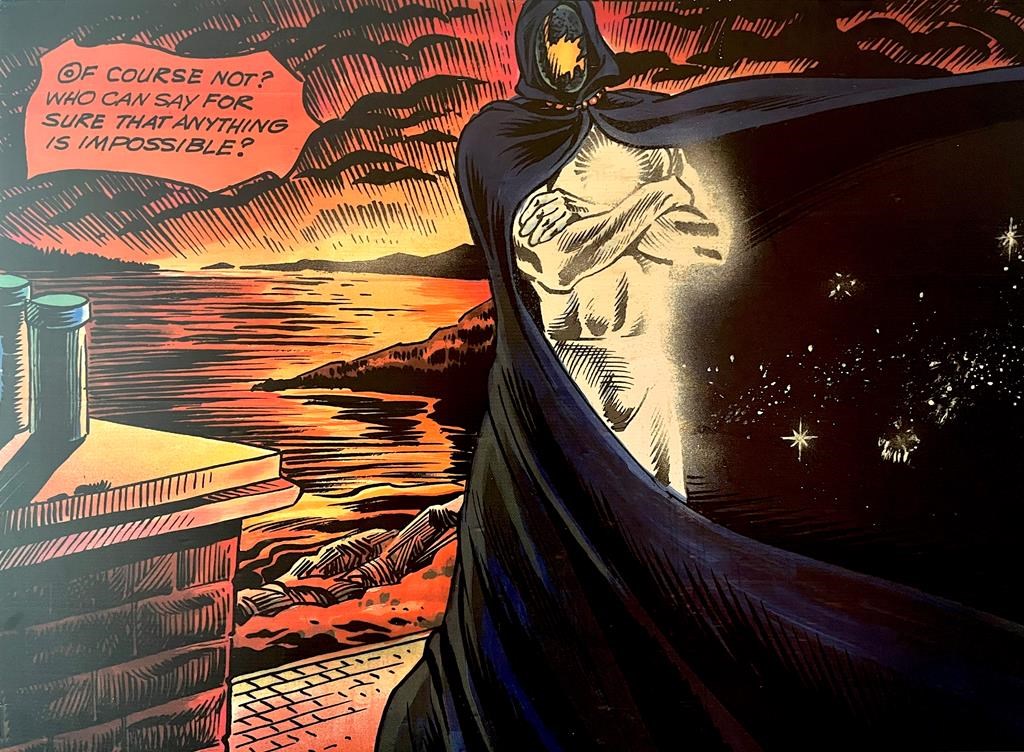 The character Captain Newfoundland is seen in a photograph of a frame from a comic published in the Newfoundland Herald magazine, in St. John's, Friday, Dec. 16, 2022. Captain Newfoundland was the province’s very own superhero, first brought to life by Marvel Comics artist Danny Bulanadi more than 40 years ago. THE CANADIAN PRESS/Sarah Smellie.

When Marvel Comics artist Danny Bulanadi died last month, fans around the world took to social media to share his illustrations of well-known and well-muscled characters including Captain America, the Fantastic Four and the Transformers.

But in Canada’s easternmost province, the Bulanadi drawings shared by fans were of a mysterious cloaked figure who sought oneness with the universe instead of fist-slinging battles.

“So we have all these half-finished panels and artwork of Captain Newfoundland, which we might release one day,” Stirling said in a recent interview. “The Captain lives on, but it will never be the same without Danny Bulanadi.”

Captain Newfoundland made his debut on the cover of the Newfoundland Herald magazine on Jan. 5, 1980. He was drawn towering in front of a sprawling purple galaxy, with planets and asteroids floating beneath his billowing blue cape. A glowing outline of the island of Newfoundland lit up his masked face.

“Captain Newfoundland: our very own superhero,” the headline pronounced.

Stirling said his father, Scott Stirling, and his grandfather, the late media mogul and mystic Geoff Stirling, dreamt up Captain Newfoundland in 1979 after returning from a meditation trip to an ashram in India.

“(They) were probably drinking some orange juice, they might have been fasting for a while, doing some yoga, meditating, and they decided to come up with a superhero that was not your typical superhero,” Jesse Stirling said. “It was more to teach lessons of peace and cosmic oneness.”

Viewers became acquainted with Stirling’s spiritual leanings in the 1970s when NTV began broadcasting 24 hours a day. He filled the overnight hours with spiralling discussions about politics, crop circles and consciousness, often interspersed with pulsating animations. Shortly after Captain Newfoundland first appeared in the Herald, an actor playing the superhero showed up on NTV’s overnight landscape.

“I’m sure many people will remember the trippy Captain Newfoundland specials, where they had segments on UFOs and ESP and Atlantis, mixed in with music videos from Paul McCartney and Queen,” Stirling said. “Back then it was literally someone in a cape and a fencing mask.”

Captain Newfoundland was an ancient, intergalactic shape-shifter who could teleport through time and space to become one with the universe. He took on several forms, among them Captain Atlantis. In the comics, Newfoundland is the tip of the mythical kingdom of Atlantis.

Jesse Stirling said his father interviewed dozens of illustrators before choosing Bulanadi to bring the captain to life. Bulanadi had worked on DC Comics’ Conan and Batman series, and his artistry stood out.

“He was so proud of his Filipino culture,” Stirling said of Bulanadi, who became a close family friend. “He was a spiritual guy, a really open guy.” In a tribute to Bulanadi on its website, Marvel said he also loved performing Filipino love songs. The artist died of congestive heart failure, Marvel said, extending condolences to his “fans all over the world.”

Reprints of the Captain Newfoundland comics ran in the back of the Herald until the magazine ceased publication in September. By the end of its run of more than 75 years, the magazine was available in some of the province’s most far-flung communities, ensuring the captain’s mantra — “to thine own self be true” — echoed far and wide.

The Captain Newfoundland ethos was fairly radical in a province that, at the time, was still largely under the control of Christian churches, says St. John’s journalist Rhea Rollmann.

“It was this breath of fresh air against everything that was coming down in the denominational education system,” she said. “It injected these different cultural, spiritual ideas that we weren’t getting anywhere else.”

About 15,000 sci-fi fans expected to attend Hal-Con this weekend in Halifax

Rollmann, who is transgender, said she can still remember reading the comics in her family kitchen while in elementary school in the 1980s.

“I remember a panel where Captain Newfoundland was showing all the different forms through which he existed, male and female incarnations,” she said. “That idea of gender fluidity which was represented, it really resonated for someone who was growing up trans and didn’t have the words or framework — there was no education about it at the time.”

Jesse Stirling admits he was teased at school when Captain Newfoundland first emerged. His classmates thought superheroes should have impressive fighting moves, rather than a penchant for discussing metaphysics, he said.

But lately, there’s a renewed interest in the captain. Copies are selling quickly of Captain Atlantis, a new collection of all the Captain Newfoundland comic strips printed on glossy paper in full colour. Stirling and his father are hoping to finally make a Captain Newfoundland movie, and possibly a video game, he said.

And of course, they hope to release new Captain Newfoundland comics, even though the superhero’s original illustrator is gone.

“It’s a real tragedy,” Stirling said of Bulanadi’s death, adding: “He had a lot of great work left in him.”

This report by The Canadian Press was first published Dec. 17, 2022.