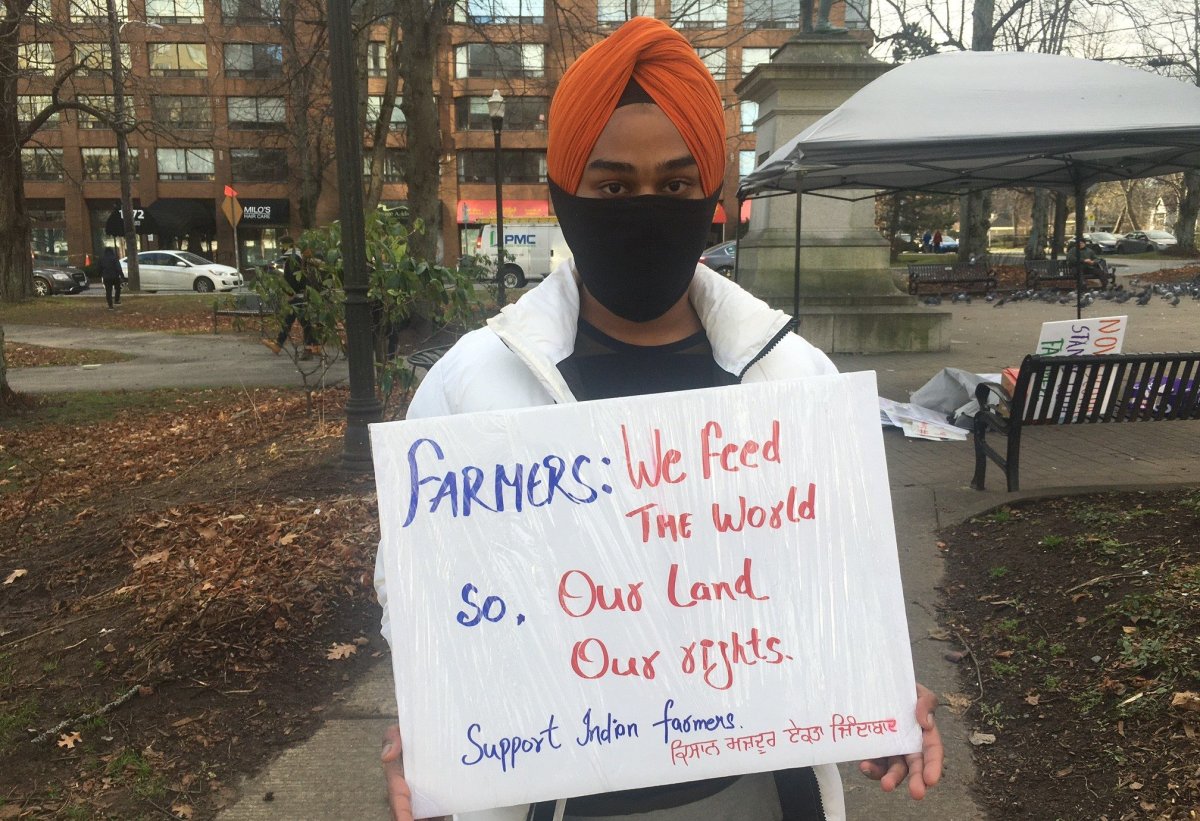 A protestor is holding a sign in Halifax in solidarity with Indian farmers protesting new agriculture laws.

Protesters could be seen down South Park Street, Spring Garden Road and University Avenue holding signs to raise awareness of what’s going on.

India’s Prime Minister Narendra Modi passed new legislation earlier this year that farmers say could cause the government to stop buying grain at guaranteed prices, and result in their exploitation by corporations.

“These bills are not in favour of farmers, especially small farmers and marginalized farmers,” said Manvander Kaur Dhillon, the Maritime Sikh Society treasurer, at the rally.

“These bills are in favour of big corporations and big businesses, so ultimately these bills will take away small farming.”

The Indian government insists the laws are part of much-needed reform in the agriculture sector, and will let farmers market their produce and increase production through private investment.

Dhillon says the society opposes the new bills and wants the government to take them back.

Protests in support of India’s farmers have been happening across North America in recent days.

This movement was sparked by reports of violence used against protestors in India.

Mankaran Singh, a protester in Halifax, says farmers in Punjab have been protesting for the last two months, but that wasn’t getting the attention of national media. Then, they went to New Delhi — the country’s capital.

“The whole world should know what’s going on in India.”

Protesters said they want to let the farmers in India know they have support from around the world.

Dozens protested on the streets of Halifax in solidarity with Indian farmers protesting new agriculture laws.

Those at the rally said people passing by have been supportive of the demonstration and wanted to know more.

“The situation is concerning and we’re all very worried about family and friends, I know that’s the reality for many of you,” Trudeau said in a video.

“Canada will always be there to defend the right to peaceful protest, and that’s why we’ve reached out through multiple means directly to Indian authorities to highlight our concerns,” he said.

2:56
How a Canadian aid agency is helping protesting farmers in India

How a Canadian aid agency is helping protesting farmers in India

The Halifax rally grew to over 50 people by the late afternoon, and those who attended say their calls for change will reach the government.

— With files from Simon Little