By
Michelle Butterfield &
Sarah Do Couto 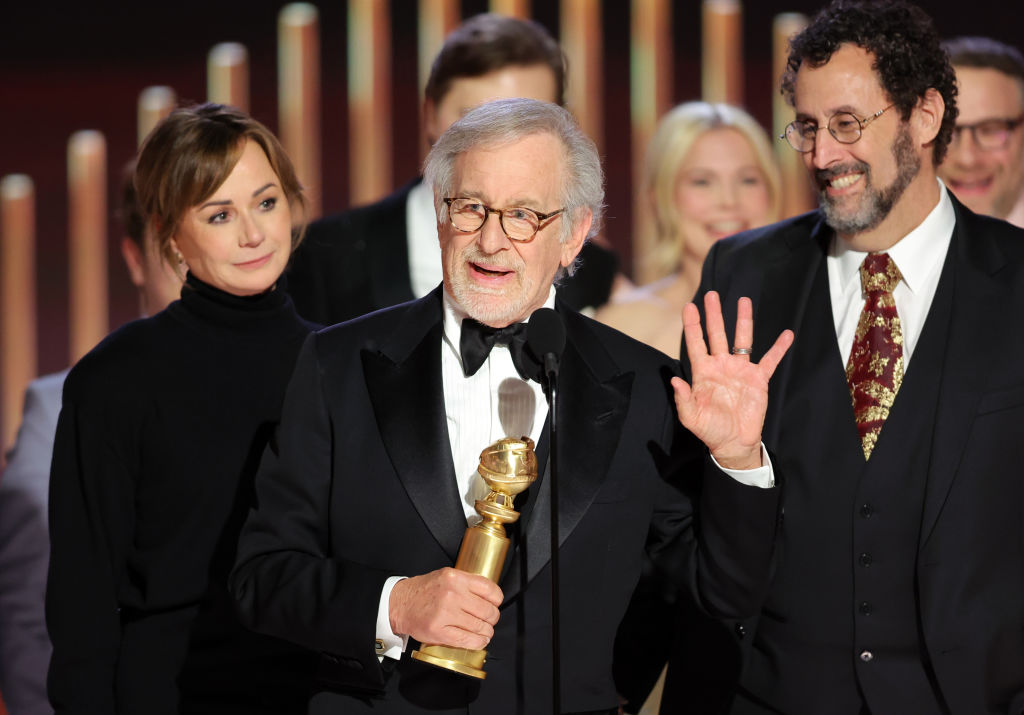 After a year off the air, the Golden Globe Awards returned Tuesday night with all of Hollywood’s glitz and glamour.

In 2022, NBC refused to air the ceremony, citing a scandal that revealed serious financial and ethical lapses in the Hollywood Foreign Press Association (HFPA), the group that organizes the Golden Globes.

But this year, the 80th annual Golden Globe Awards returned, with comedian Jerrod Carmichael at the helm as the show’s host. In his opening monologue, Carmichael joked that he was “here because I’m Black,” a reference to the Los Angeles Times investigation that found there were no Black members included in the HFPA’s voting body.

A look at this year's Golden Globe WINNER for Best Picture – Drama, @thefabelmans! What a FANTASTIC film 🎥✨ #GoldenGlobes pic.twitter.com/HAnoMQULT9

Ke Huy Quan took home the first award of the night for Best Actor in a Supporting Role in Any Motion Picture for Everything Everywhere All at Once.

Colin Farrell took home the coveted Best Actor in a Motion Picture (Musical or Comedy) award for The Banshees of Inisherin. During his speech, he even thanked Jenny the Donkey, an easy fan favourite character from the film.

Austin Butler, who played Elvis in the titular Baz Luhrmann film, won the award for Best Actor (Drama). Butler was flustered as he gave his acceptance speech, in a deep drawl similar to Elvis’ own.

During the ceremony, writer, director and producer Ryan Murphey was honoured with the Carol Burnett Award for his influential, decades-long career. Murphey was praised for lifting “diverse voices,” “underdogs” and “marginalized” people in his work, which includes Glee, American Horror Story and Monster: The Jeffrey Dahmer Story. Murphey invited Mj Rodriguez to receive a standing ovation during his speech, as she became the first transgender woman to win a Golden Globe during last year’s unaired ceremony.

Murphey also thanked several other LGBTQ2+ actors by name during his speech “to make a point of hope and progress.”

President Volodymyr Zelenskyy made a surprise appearance during the ceremony via a pre-recorded video message. He discussed the war in Ukraine, and said the country would not lose to Russian aggression. “There will be no third world war, it is not a trilogy,” he said.

Jennifer Coolidge, who made a giant, revitalizing career splash in The White Lotus, won for Best Actress in a Supporting Role in a Limited Series/Anthology or Motion Picture. Amid a few accidental f-bombs, Coolidge thanked all the people who gave her “little jobs” during the slow points of her career, specifically writer and producer Mike White.

Evan Peters gave a brief speech for his Best Actor (Limited Series or Motion Picture Made for Television) win for Monster: The Jeffrey Dahmer Story. “It was a difficult one to make, a difficult one to watch, but I sincerely hope some good came out of it,” he said.

Eddie Murphy received the Cecil B. DeMille Award for his “outstanding contributions to the world of entertainment.” Tracy Morgan, who presented the award alongside Jamie Lee Curtis, said Murphy was the inspiration for his own comedy career. He told Murphy it was the “biggest honour of his life” to present him with the award.

🎉 The biggest round of applause for Eddie Murphy, this year's Cecil B. DeMille Award recipient! Your decades of unbeatable comedy and incredible performances deserve to be acknowledged and celebrated! 🎉 #GoldenGlobes pic.twitter.com/IWiU6LEmmf

When Murphy took the stage, he jokingly offered advice to any young people up-and-coming in the entertainment industry: “There is a definitive blueprint that you can follow to achieve success, prosperity, longevity and peace of mind,” he said. “Pay your taxes, mind your business and keep Will Smith’s wife’s name out you’re f–king mouth!” he joked, referencing Smith’s now-infamous line delivered at the 2022 Academy Awards before he climbed on stage and slapped presenter Chris Rock.

“We make this show because we love comedy and we love TV,” Quinta Brunson said as Abbott Elementary won the award for Best Series (Musical or Comedy). “During a very tough time in this country I’m glad that Abbott Elementary is able to make people laugh.”

There were also a few notable Canadian nominations, including Disney’s Turning Red, which was up for Best Animated Motion Picture.

Canadian filmmaker James Cameron was also nominated for Avatar: The Way of Water and Toronto-born Sarah Polley was nominated for her screenplay, Woman Talking. However, none of the Canadian nominees managed to pick up an award.

(Find a complete list of the nominees below. Winners appear in bold.)

Babylon
WINNER: The Banshees of Inisherin
Everything Everywhere All at Once
Glass Onion: A Knives Out Mystery
Triangle of Sadness

James Cameron, Avatar: The Way of Water
Daniel Kwan and Daniel Scheinert, Everything Everywhere All at Once
Baz Luhrmann, Elvis
Martin McDonagh, The Banshees of Inisherin
WINNER: Steven Spielberg, The Fabelmans

Best Performance by an Actress in a Motion Picture – Drama

Best Performance by an Actor in a Motion Picture – Drama

Jeremy Renner shares first photo from hospital after accident, sends love to ‘all’

WINNER: Abbott Elementary
The Bear
Hacks
Only Murders in the Building
Wednesday

Best Performance by an Actor in a Television Series – Drama

Best Performance by an Actress in a Television Series – Drama

Best Television Limited Series or Motion Picture Made for Television

Best Performance by an Actress in a Supporting Role in a Musical, Comedy or Drama Television Series

Best Performance by an Actor in a Supporting Role in a Musical, Comedy or Drama Television Series

Best actor in a Television Series (Musical or Comedy)

Best Actress in a Televison Series (Musical or Comedy)