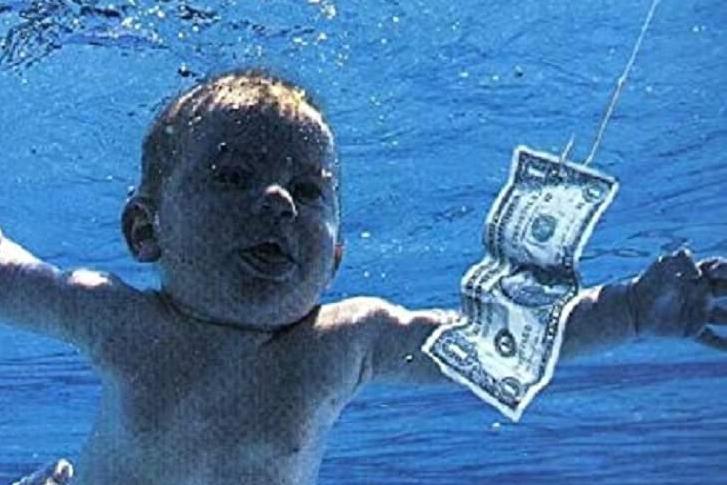 Some 30 million people have purchased the album to date and many more have at least seen the cover image, which shows baby Spencer Elden reaching for a dollar bill on a fishing line in a pool, his penis visible beneath him.

Elden, now 30, is reaching for a few million dollar bills with his new lawsuit, which was filed in a California court this week.

He claims that his parents never signed a release allowing the photo to appear on the album cover, and that the image is child pornography because the dollar bill makes him look like a “sex worker.” He also claims to have suffered “lifelong damages” and “extreme and permanent emotional distress” from being photographed for the album.

“The images exposed Spencer’s intimate body part and lasciviously displayed Spencer’s genitals from the time he was an infant to the present day,” Elden’s lawyer, Robert Y. Lewis, argues in the court filing.

Elden is seeking at least $150,000 in damages from each of 17 defendants, including former band members Dave Grohl, Krist Novoselic and the estate of Kurt Cobain. Cobain’s widow, Courtney Love, and photographer Kirk Weddle are also among the defendants.

According to the lawsuit, Elden’s “true identity and legal name are forever tied to the commercial sexual exploitation he experienced as a minor which has been distributed and sold worldwide from the time he was a baby to the present day.”

Non-sexualized images of naked infants are generally not considered pornographic under U.S. law, and the original Nevermind cover remains uncensored on various streaming platforms today, including Apple Music and Spotify.

Elden was four months old at the time of the original photoshoot, which reportedly lasted 15 seconds and earned his parents $200. The fishing line with the dollar bill was later added to the image.

Elden has a large tattoo that reads “Nevermind” on his chest, and he has recreated the iconic pool photo in later shoots for Nevermind‘s 10th, 17th, 20th and 25th anniversaries, though he has worn swim trunks each time.

He’s also expressed mixed feelings about the album cover in interviews that accompanied those anniversary shoots.

He later expressed frustration about never meeting the band or getting additional compensation, after posing for another shoot at the age of 25.

“It’s hard not to get upset when you hear how much money was involved,” he told TIME in 2016. “I just woke up already being a part of this huge project. It’s pretty difficult — you feel like you’re famous for nothing, but you didn’t really do anything but their album.”

Weddle has also discussed the impact of the photo on Elden in the past.

“I’m still in contact with Spencer,” he told The Guardian in 2019. “I used to think, ‘Man, when that kid is 16 he’s gonna hate my guts!’ He doesn’t, but he’s conflicted about the picture. He feels that everybody made money off it and he didn’t. I think he deserves something. But it’s always the record labels that make the money.”

Social media users responded to the lawsuit by blasting Elden, with some accusing him of hypocrisy. Others simply called him a “big baby” and suggested that he was recreating the photo by reaching for Nirvana’s money.

Traded on the ‘Nirvana baby’ nickname all his life and happy to recreate the image for a payout but now wants financial redress for emotional damage. 🤔 #NeverMind #nirvana pic.twitter.com/L5Q5UglRG2

Representatives for the band and their record label did not immediately respond to the lawsuit.