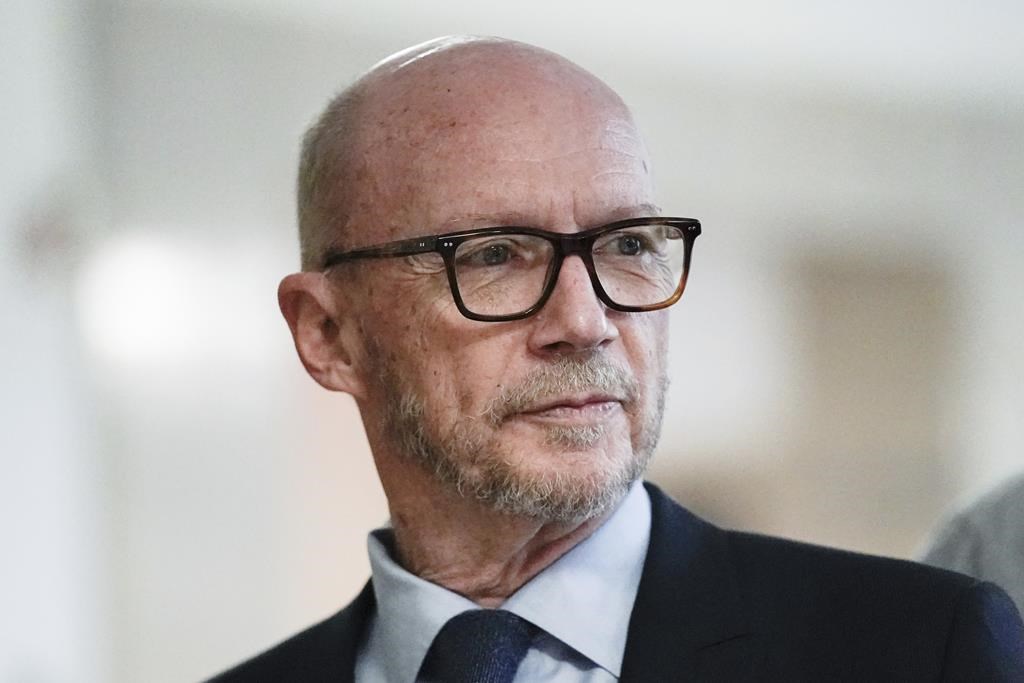 A jury ordered Academy Award-winning filmmaker Paul Haggis Thursday to pay at least $7.5 million to a woman who accused him of rape in one of several #MeToo-era cases that have put Hollywood notables’ behavior on trial this fall. The jury also plans to award additional punitive damages.

Veering from sex to red-carpet socializing to Scientology, the civil court trial pitted Haggis, known for writing best picture Oscar winners “Million Dollar Baby” and “Crash,” against Haleigh Breest, a publicist who met him while working at movie premieres in the early 2010s. After a screening afterparty in January 2013, he offered her a lift home and invited her to his New York apartment for a drink.

After hugging her lawyers, Breest said she was “very grateful” for the verdict as she left court. Haggis declined to comment.

He sat stock-still as the verdict was read, then turned to look at his three adult daughters in the courtroom audience. One had been crying on a sister’s shoulder.

Paul Haggis trial: Publicist accuses filmmaker of rape, ‘I was like a trapped animal’

Breest, 36, said Haggis then subjected her to unwanted advances and ultimately compelled her to perform oral sex and raped her despite her entreaties to stop. Haggis, 69, said the publicist was flirtatious and, while sometimes seeming “conflicted,” initiated kisses and oral sex in an entirely consensual interaction. He said he couldn’t recall whether they had intercourse.

Jurors sided with Breest, who said she suffered psychological and professional consequences from her encounter with Haggis. She sued in late 2017.

“I thought I was getting a ride home. I agreed to have a drink. What happened never should have happened. And it had nothing to do with me, and everything to do with him and his actions,” she told jurors last month.

While awarding her $7.5 million to compensate for suffering, the jury concluded that punitive damages should also be awarded. Jurors return Monday for more court proceedings to help them decide that amount.

The verdict came weeks after another civil jury, in the federal courthouse next door, decided that Kevin Spacey didn’t sexually abuse fellow actor and then-teenager Anthony Rapp in 1986. Meanwhile, “That ’70s Show” actor Danny Masterson and former movie magnate Harvey Weinstein are on trial, separately, on criminal rape charges in Los Angeles. Both deny the allegations, and Weinstein is appealing a conviction in New York.

All four cases followed the #MeToo upwelling of denunciations, disclosures and demands for accountability about sexual misconduct, triggered by October 2017 news reports on decades of allegations about Weinstein.

Breest, in particular, said she decided to sue Haggis because his public condemnations of Weinstein infuriated her: “This man raped me, and he is presenting himself as a champion of women to the world,” she recalled thinking.

Four other women also testified that they experienced forceful, unwelcome passes — and in one case, rape — by Haggis in separate encounters going back to 1996. None of the four took legal action.

“The behavior showed me that he was somebody who was never going to stop,” one woman testified, saying that Haggis repeatedly tried to kiss her against her will and even followed her into and out of a taxi to her apartment in Toronto in 2015. His lawyers sought to assail the accusers’ credibility.

The Associated Press generally does not identify people who say they have been sexually assaulted unless they come forward publicly, as Breest has done.

Haggis denied all of the allegations. He told jurors the accusations left him shaken.

“I’m scared because I don’t know why women, why anyone, would lie about things like this,” he said. His defense, meanwhile, introduced jurors to several women — including ex-wife and former longtime “Dallas” cast member Deborah Rennard — who said the screenwriter-director took it in stride when they rebuffed his romantic or sexual overtures.

During three weeks of testimony, the trial scrutinized text messages that Breest sent to friends about what happened with Haggis, emails between them before and after the night in question, and some differences between their testimony and what they said in early court papers.

The two sides debated whether Haggis was physically capable of carrying out the alleged attack eight weeks after a spinal surgery. Psychology experts offered dueling perspectives about what one called widespread misconceptions about rape victims’ behavior, such as assumptions that victims would have no subsequent contact with their attackers.

And jurors heard extensive testimony about the Church of Scientology, the religion founded by science fiction and fantasy author L. Ron Hubbard in the 1950s. Haggis was an adherent for decades before publicly renouncing, and denouncing, Scientology in 2009.

Through testimony from Haggis and other ex-members, his defense argued that the church set out to discredit him and might have had something to do with the lawsuit.

No witnesses said they knew that Haggis’ accusers or Breest’s lawyers had Scientology ties, and his lawyers acknowledged that Breest herself does not. Still, Haggis lawyer Priya Chaudhry sought to persuade jurors that there were “the footprints, though maybe not the fingerprints, of Scientology’s involvement here.”

The church said in a statement that it has no involvement in the matter, arguing that Haggis is trying to shame his accusers with an “absurd and patently false” claim. Breest’s lawyers have called it “a shameful and unsupported conspiracy theory.”

The Canadian-born Haggis got his start as a TV writer, eventually penning episodes of such well-known 1980s series as “Diff’rent Strokes” and “Thirtysomething.” He broke into movies with a splash with “Million Dollar Baby” and “Crash,” which he also directed and co-produced. Each film won the Academy Award for best picture, for 2004 and 2005 respectively, and Haggis also won a screenwriting Oscar for “Crash.”

His other credits include the Oscar-nominated screenplay for “Letters From Iwo Jima” and the screenplays for the James Bond movies “Casino Royale” and “Quantum of Solace.”