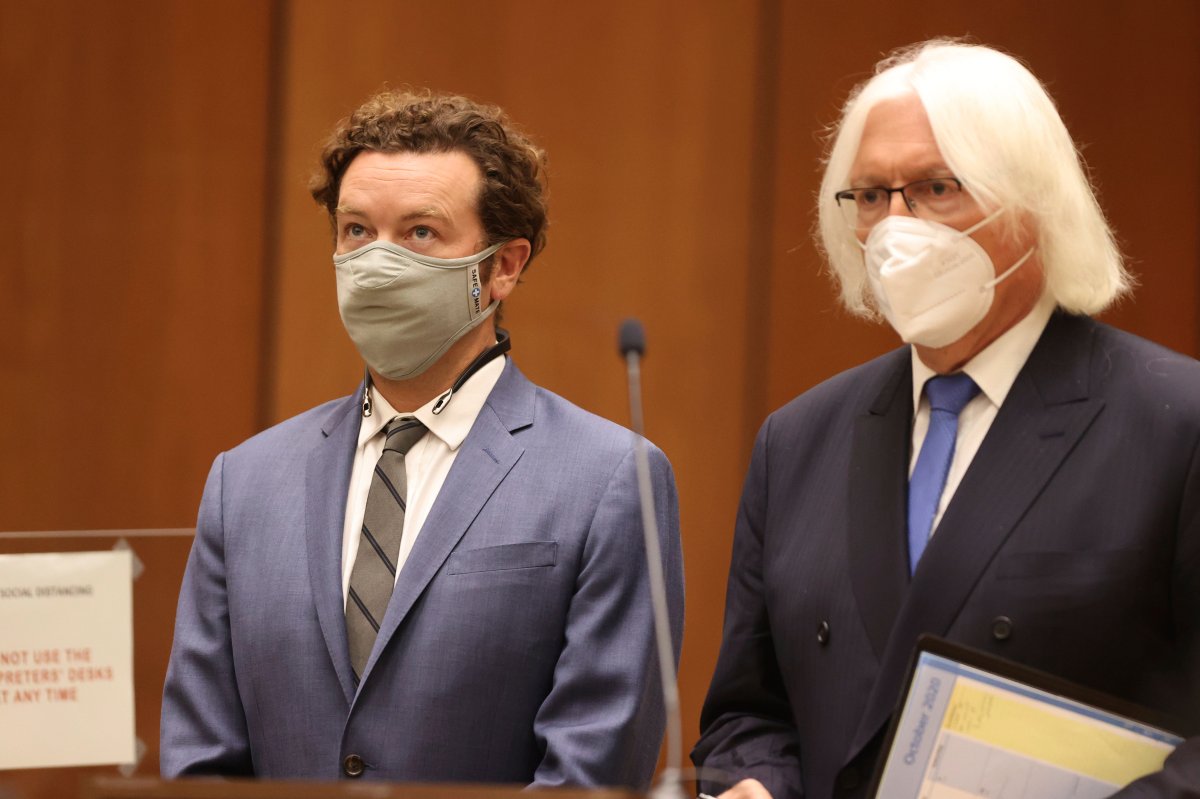 Danny Masterson stands with his lawyer, Thomas Mesereau, as he is arraigned on rape charges at Los Angeles Superior Court on Sept. 18, 2020.

NOTE: The following article contains content that some might find disturbing. Please read at your own discretion.

A lawyer for actor Danny Masterson on Thursday repeatedly challenged a woman on the witness stand over why she agreed to go to Masterson’s house on the night she said he raped her.

“You went over to Danny Masterson’s house knowing full well you would be taking your clothes off, right?” Thomas Mesereau asked.

Mesereau had just played a recording where the woman had told police Masterson had texted her to come to his house, take her clothes off and get into his hot tub on a night late in 2003.

The woman, known in court only as N. Trout, was the third Masterson accuser to testify at a hearing to determine whether there is enough evidence for the 45-year-old That ’70s Show actor to stand trial on three counts of rape. He has pleaded not guilty, and Mesereau has said he will prove Masterson’s innocence.

The Associated Press does not typically name people who say they were victims of sexual abuse.

Earlier in the hearing, she had told the story of the night when Masterson, a few nights after they had drinks with mutual friends, began texting her in a demanding tone that she needed to come to his house.

She said she agreed to come over to talk and possibly have a glass of wine after setting conditions and boundaries, including that she wouldn’t be putting on a swimsuit or getting into his pool. She testified that she was somewhat flattered by Masterson’s attention and might be open to kissing.

Trout testified that she had one or more drinks to calm herself before she walked to Masterson’s house, and he gave her a glass of wine when she arrived.

She said he soon took her into the backyard, where he told her to take her clothes off and get into the hot tub.

“Take them off. If you don’t do it, I’m going to do it. Get them off,” she remembered him saying.

She said she listened to him, because “I didn’t want any violence to take place, I didn’t want things to escalate. I was giggling, trying to say ‘No, I don’t want to.’”

She later added that she did what he said that night partly because she believed he was speaking from a place of authority in the high level he had reached in the Church of Scientology, of which both were members.

Trout said that both in her memory and in her state of mind at the time, things began getting blurry when they entered the hot tub, but testified that Masterson took her upstairs to the shower, where he raped her, then raped her again on his bed.

Mesereau challenged her over her inclusion of details that in the 2017 interview with Los Angeles police she had said she didn’t recall.

“In a prior interview, you said you didn’t remember going up the stairs,” Mesereau said. “That was in 2017. This is 2021. Do you remember more now than you did then?”

She answered, “I’m sure you’re familiar with the way that trauma works, and when you open it up as I’ve had to do these past four years, pieces of it have become less blurry for me.”

Mesereau also challenged her over what alcohol and medication she consumed that night, and asked whether she’d had either before court.

“I had a little bit of Xanax so I could do this,” she said.

The hearing is expected to conclude Friday, when Judge Charlaine F. Olmedo will consider the evidence presented and decide whether to order a trial for Masterson, who has been free on bail since his arrest in June. He could get up to 45 years in prison if convicted.