‘Dancing With the Stars’ finale: Who won the Mirrorball trophy? 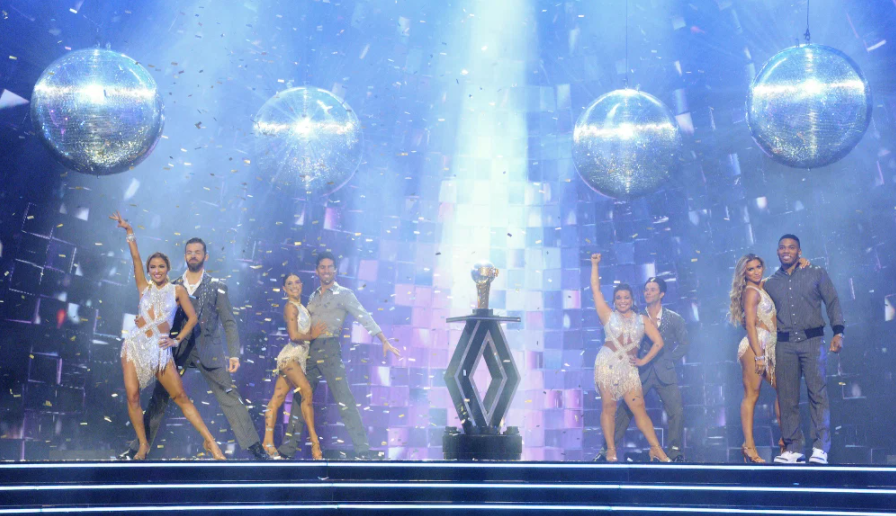 The four couples compete for the Mirrorball Trophy on the 'Dancing With the Stars' finale.

NOTE: This article contains ‘Dancing With the Stars’ finale spoilers. Please read at your own discretion.

A Canadian has won the coveted Dancing With the Stars Mirrorball trophy.

Kaitlyn Bristowe and partner Artem Chigvintsev hit the reality show’s dance floor for the last time in the season finale on Monday night, and ended up taking home the crown.

The former Bachelorette faced off against the three other finalists — Justina Machado, Nelly and Nev Schulman — as each celebrity and their pro partner performed two dances: a repeat of one of their favourite routines from the season, and a freestyle performance.

Bristowe, 35, and Chigvintsev picked Week 9’s Argentine tango to Britney Spears’ Toxic for their repeat performance. As has happened before, the pair pulled it off seamlessly and scored 30/30.

Then came time for their freestyle dance, which was set to Sparkling Diamonds from movie Moulin Rouge.

The elegance, the class, the poise! ✨ @KaitlynBristowe, thank you for sharing your talent with us each and every week 😍 #TeamWillYouAcceptThisDance #DWTSFinale pic.twitter.com/LdDOJwW2h9

Judge Carrie Ann Inaba, who had been tough on Bristowe throughout the competition, praised the duo for their work. They earned another perfect 30/30 score.

The other couples brought in near-perfect scores, but Bristowe and Chigvintsev outshone them in the end.

Rapper Nelly and pro Daniella Karagach came in second. Schulman and pro Jenna Johnson came in third, while Machado and pro Sasha Farber brought up the rear in fourth.

Sending the biggest congratulations to the Dancing with the Stars 2020 winner, @kaitlynbristowe! Take extra special care of the mirrorball trophy, #TeamWillYouAcceptThisDance 🏆 Tune in to @GMA tomorrow to celebrate 🎉 pic.twitter.com/d2dhYjR8AK

Many DWTS fans weren’t pleased with the outcome, with several saying that Schulman or Machado deserved to win. Some expressed sadness that Nelly didn’t take home the Mirrorball.

It should have been a tie last night between Justina Machado and Nev on #DWTSFinale pic.twitter.com/oYpQA78eIg

Nelly should have won 🗣#DWTSFinale

Still, some fans were pleased with the Canadian’s victory.

Great season of @DancingABC so proud of all of the cast during this covid times. Also so proud of @kaitlynbristowe for being the first Canadian to win the mirror ball. And also @DKaragach for killing it on her first season as a pro. #DWTS #DWTSFinale #DWTS29

Kaitlyn deserved that win last night, congrats to her and Artem! #DWTSFinale

Bristowe will get the chance to show off her shiny new hardware on Tuesday’s episode of Good Morning America.