By
Victoria Ahearn and Tara Deschamps
The Canadian Press 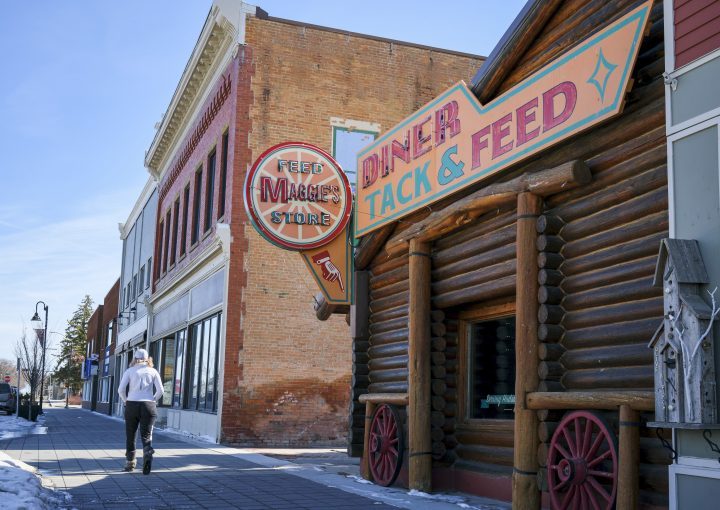 FILE: A pedestrian passes by a set featured in the TV series "Heartland" in High River, Alta., Friday, March 27, 2020, amid a worldwide COVID-19 flu pandemic.

Canadian producers are applauding a new temporary federal relief fund to help film and television productions that have been stalled by a lack of COVID-19 insurance.

On Friday Heritage Minister Steven Guilbeault announced the $50-million fund as a short-term measure that will be managed through Telefilm Canada and the Canada Media Fund.

“There’s rarely been a single issue affecting this industry as profoundly as this one, so obviously the news is very welcome,” said Calgary-based “Wynonna Earp” producer Tom Cox, who’s been waiting for months for such a relief measure so he can move forward on some upcoming productions.

“There were literally tens of thousands of jobs and hundreds of millions of (dollars in) production activity on the line, and they recognized that and have put forward a positive proposal that obviously will be of absolutely essential value to the industry.”

Guilbeault said a production company would need to meet certain criteria in order to be eligible for the fund.

“It would have to be a production owned and controlled by Canadians regarding Canadian production,” Guilbeault said in a conference call with reporters.

“The company would have to have a COVID security plan. It would have to be an independent production company, so not affiliated with a broadcaster.”

Telefilm will announce more information on the implementation of the new fund in the coming weeks, he added, noting the ministry is “literally running to put this together and get this in operation as soon as possible.”

“We will be looking at the evolution of the situation very closely and if we need to do more to help the sector, as we have throughout the sector, we will continue to do that.”

The announcement comes after the Canadian Media Producers Association (CMPA) and the Association quebecoise de la production mediatique pushed for a fund, where producers would pay premiums to access COVID-19 coverage and the government would offer a $100-million backstop if money generated though the sale of the policies was insufficient to cover the claims made.

The crisis arose during the pandemic when some insurance companies that service the film and TV industry started excluding from their new production policies any coverage for COVID-19 on a go-forward basis.

That meant a large number of Canadian productions that didn’t have insurance policies in place before COVID-19 couldn’t take the financial risk of starting up only to have the virus shut down the project.

The organizations said last week that they have identified 214 camera-ready film and TV projects, 19,560 jobs and $1 billion in production volume that have stalled because insurers aren’t offering COVID-19 coverage.

Winnipeg producer Kyle Irving has a couple of projects on hold due to a lack of such insurance. The partner at Eagle Vision was able to roll cameras on season 4 of the CBC series “Burden of Truth” earlier this month, but only because co-producer eOne was able “to back up the insurance risk,” he said in an interview.

“Unless you have the size of a company like that, Canadian independent production companies can’t take on that level of risk,” said Irving, who expressed optimism about Friday’s announcement.

“The devil is always in the details, but we’ll give the government the benefit of the doubt. I know the CMPA is working actively on how to properly set this up with government, and has been informing and consulting them to make sure that they have all the information they need to make sure it’s done right. So fingers crossed.”

Friday’s announcement falls short of the funding the groups were asking for, but Guilbeault suggested the government is willing to increase the fund if necessary.

“If we realized that $50 million dollars is not enough and more is required to help the audiovisual sector, we will certainly adjust this measure accordingly.”

The performers’ union ACTRA and the industry consortium FilmOntario were among the film and TV organizations that praised Friday’s news on social media.

CMPA president and CEO Reynolds Mastin thanked the government in a statement, noting the funding “will help hundreds of camera-ready Canadian film and TV projects move forward after months of uncertainty.”

“The swift implementation of a workable program is now mission critical, to safeguard thousands of jobs in jeopardy.”