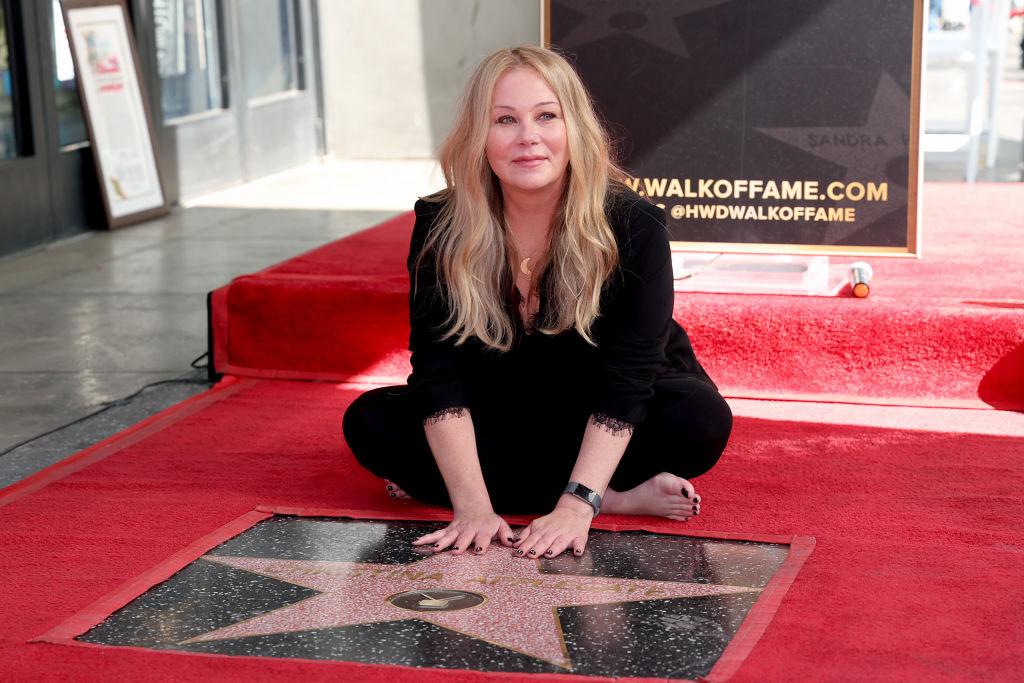 Christina Applegate celebrated her Hollywood Walk of Fame ceremony Monday, marking the first time the actor has made a public appearance since revealing her multiple sclerosis diagnosis.

Applegate, reports Variety, was supposed to get her star on the Walk of Fame in 2020, but the ceremony was delayed by the COVID-19 pandemic. She announced her diagnosis on Twitter the following year while she was filming the final season of her Netflix comedy Dead to Me.

“Hi friends. A few months ago I was diagnosed with MS,” read the tweet. “It’s been a strange journey. But I have been so supported by people that I know who also have this condition. It’s been a tough road. But as we all know, the road keeps going. Unless some a–hole blocks it.”

Hi friends. A few months ago I was diagnosed with MS. It’s been a strange journey. But I have been so supported by people that I know who also have this condition. It’s been a tough road. But as we all know, the road keeps going. Unless some asshole blocks it.

Prior to Monday’s celebration, Applegate told The New York Times it would be the “first time anyone’s going to see me the way I am.”

“I put on 40 pounds; I can’t walk without a cane. I want people to know that I am very aware of all of that,” she said in the interview.

She also shared a picture of several of her canes, telling her Twitter followers she was trying to decide which one she would use for “a very important ceremony coming up.”

I have a very important ceremony coming up. This will be my first time out since diagnosed with MS. Walking sticks are now part of my new normal. Thank you @neowalksticks for these beauties. Stay tuned to see which ones make the cut for a week of stuff. pic.twitter.com/O543p1G4vS

Applegate was all smiles at the Walk of Fame ceremony, appearing barefoot on the red carpet surrounded by friends and co-stars.

Out to support Applegate were her Married with Children co-stars Katey Sagal and David Faustino, as well as her Dead to Me co-star Linda Cardellini and the show’s creator, Liz Feldman.

Christina Applegate was surrounded by love — in the form of her Dead To Me BFF Linda Cardellini and her Married with Children family Katey Sagal and David Faustino — as her truly iconic career was honored with a star on the Hollywood Walk of Fame today. pic.twitter.com/Ft5ZY6Pg7j

According to NBC, Applegate’s star sits adjacent to the stars of Sagal and Ed O’Neill, who played her dad on Married with Children.

Applegate was celebrated for her long career, having made her television debut on Days of Our Lives just one year after she was born as the baby son of the character played by her real-life mother, Nancy Priddy.

She played small roles in several movies and shows throughout her childhood and into her teens, but her breakout role was playing Kelly Bundy, the beautiful and sarcastic daughter on Married with Children.

Her star continued to rise when she was awarded an Emmy for outstanding guest actress in a comedy series for her portrayal of the middle sister of Rachel Green (Jennifer Aniston) in Friends.

She was also nominated for a Tony award for best actress for her role as taxi dancer Charity Hope Valentine in the 2005 revival of Sweet Charity.

John Aniston, ‘Days of Our Lives’ star and dad to Jennifer Aniston, dead at 89

Applegate took to the podium at the Walk of Fame ceremony assisted by Sagal, who stayed on stage with her during her speech.

She became tearful while talking about her daughter and thanking her for her support.

“The most important person in this world is my daughter,” Applegate said. “You are so much more than even you know. You are so beautiful and kind and smart and interesting. I’m blessed every day that I get to wake up and take you to school…. Thank you for standing by me through all of this.”

For Applegate, filming the new season of Dead to Me — a dramedy in which she plays Jen, a widowed real estate agent — was no easy feat. She decided to participate fully in the production despite her diagnosis because she felt she had an “obligation” to the story and her on-set colleagues.

Applegate struggled to work as hard or as long as she’d previously been able to, especially in the heat. She had difficulty walking down the stairs of her trailer and had to often use a wheelchair on set. Some days, Applegate couldn’t work at all.

However, through savvy on-camera blocking (and the help of a sound technician and longtime friend who held up her legs for certain scenes), the season was completed.

Applegate told The New York Times she wished she had paid more attention to the warning signs of MS, including dizziness and tingling and numbness of her extremities, prior to diagnosis.

Though she claimed to have processed her illness, she has not accepted it.

— with files from Global News’ Sarah Do Couto