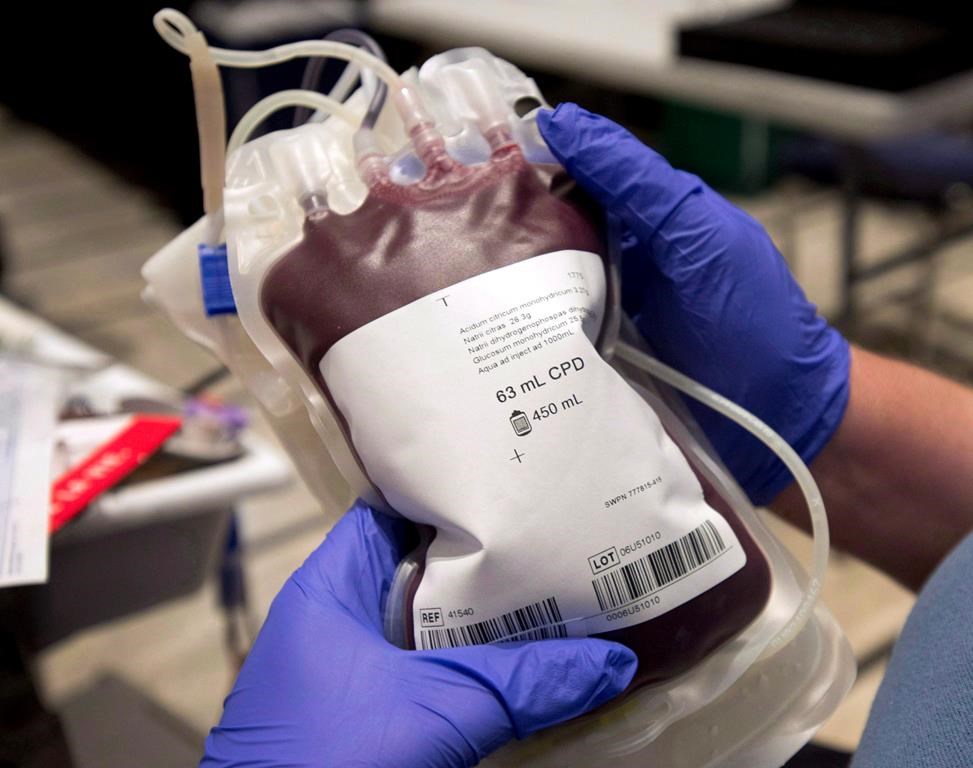 A bag of blood is shown at a clinic in Montreal, Thursday, November 29, 2012. THE CANADIAN PRESS/Ryan Remiorz.

As Canada’s COVID-19 cases ease and restrictions are lifted, hospitals are resuming surgeries that were put on hold by the pandemic — and that’s led to a sudden and urgent need for blood donations.

Canadian Blood Services (CBS) said Tuesday that more than 23,000 donors need to roll up their sleeves and give blood before the end of July in order to meet the unprecedented demand. They say in addition to addressing the backlog of surgeries, summers can also lead to a rise in road accidents whose victims will also need blood transfusions, creating a perfect storm.

“It takes several donors just to save one person’s life,” said Kristie Upton, territory manager for donor relations in Toronto for CBS.

“Someone who’s experiencing internal bleeding could need up to two to eight donors a week. If you’re going through heart surgery, that’s up to five donors. … Very often it’s life or death.”

Upton says donations have begun to drop off as public health restrictions ease across the country, likely due to people wanting to dive back into public life instead of booking another appointment at the blood bank. Some appointments are also being missed or cancelled, according to CBS.

Surgeons say the potential for a blood shortage in Canada’s hospitals would be devastating as they work through the staggering number of postponed surgeries.

In Ontario alone, the Financial Accountability Office estimates the backlog of surgeries postponed due to the pandemic could be over 400,000 by the fall. That’s about two-thirds the number of surgeries performed during a normal year in the province.

Dr. Sav Brar, a surgeon at Mount Sinai Hospital at the University of Toronto, says he and his colleagues aren’t seeing a shortage currently. But he adds the potential for one is worrisome.

“The lack of blood being available for transfusions is something you hear about in war or in other extreme situations,” he said.

“This is something that would be catastrophic if it were to come to pass.”

Brar says blood donations are critically needed not just for trauma victims and complex surgeries, but for other Canadians who may require a transfusion in an “unexpected way.”

Shami Rispoli is one of those Canadians. In the fall of 2020, shortly after giving birth to her son, the 32-year-old Hamilton woman began experiencing persistent pain in her stomach that soon became unbearable.

On Nov. 1, Rispoli was rushed to hospital, where she had to go alone due to COVID-19 restrictions. Once there, doctors found she was suffering from stomach ulcers — a reaction to the painkillers she was prescribed following her caesarean section — which had caused her to lose a dangerous amount of blood.

“They had said, had I lost a handful of units more, it could have been fatal,” she said. “So, yeah, that was one of the scariest moments ever.”

After multiple transfusions over the next few days, however, Rispoli was able to walk back out of the hospital and rejoin her new family, who she had feared she’d never see again.

“I genuinely felt like I owe my life to these donors and I owe my life to Canadian Blood Services because I would not be standing and walking out of the hospital four days later without that,” she said.

Rispoli has now vowed to hold annual fundraisers for CBS on her birthday, and is using every opportunity she gets to urge people to donate.

“It might be scary at first, but it’s life-saving for someone,” she said. “My message to people would be to just try.”

CBS says because of the continued risk of COVID-19, walk-in appointments are still not being accepted. However, appointments can be made easily online, either well in advance or on the same day donors wish to give blood.

The agency says safety protocols are in place to protect the health of donors and staff.

Last March, in response to a similar call for donations as the COVID-19 pandemic began, CBS said Canadians stepped up in large numbers to fill that demand.

The agency and surgeons are now hoping for a similar surge in donors at an even more crucial time.

“We have a very short period of time to fix this … before we get into a critical situation,” Brar said.

— With files from Jamie Mauracher