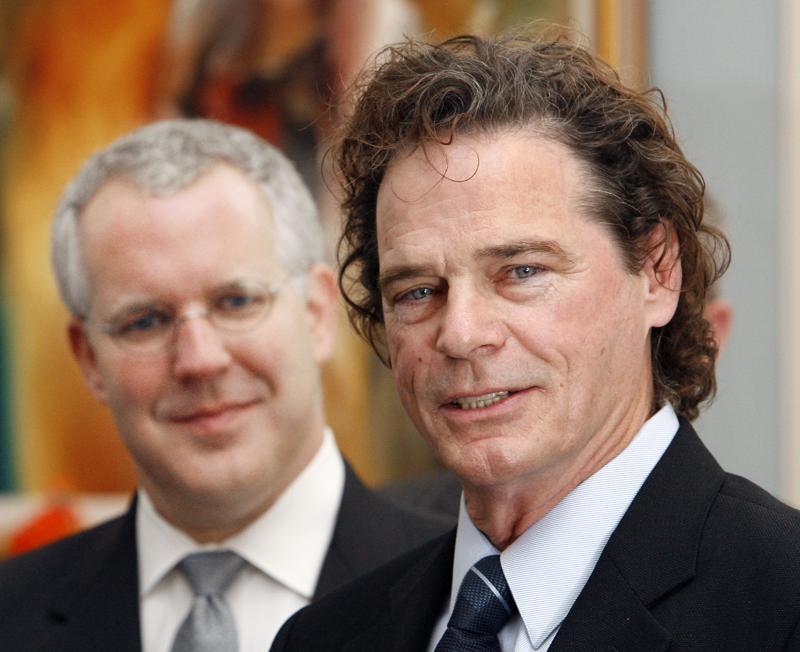 FILE – In this Wednesday, Feb. 21, 2007. file photo, Music artist B.J. Thomas speaks after Gov. Brad Henry, left, presented Thomas with a proclamation at the state Capitol in Oklahoma City. B.J. Thomas, the versatile, Grammy-winning singer who enjoyed success on the pop, country and gospel charts with such hits as “I Just Can’t Help Believing,” “Raindrops Keep Fallin’ On My Head” and “Hooked On a Feeling,” has died, Saturday, May 29, 2021. He was 78.

B.J. Thomas, the Grammy-winning singer who enjoyed success on the pop, country and gospel charts with such hits as “I Just Can’t Help Believing,” “Raindrops Keep Fallin’ On My Head” and “Hooked on a Feeling,” has died. He was 78.

Thomas, who announced in March that he had been diagnosed with lung cancer, died from complications of the disease Saturday at his home in Arlington, Texas, his publicist Jeremy Westby said in a statement.

A Hugo, Oklahoma-native who grew up in Houston, Billy Joe Thomas broke through in 1966 with a gospel-styled cover of Hank Williams’ “I’m So Lonesome I Could Cry” and went on to sell millions of records and have dozens of hits across genres. He reached No. 1 with pop, adult contemporary and country listeners in 1976 with ?(Hey Won’t You Play) Another Somebody Done Somebody Wrong Song.” The same year, his “Home Where I Belong” became one of the first gospel albums to be certified platinum for selling more than 1 million copies.

Dionne Warwick, who duetted with Thomas, sent out a tweet Saturday with her condolences.

“My sincere condolences to the family of one of my favorite duet partners, BJ Thomas. I will miss him as I know so many others will as well. Rest In Peace my friend,” she said.

Thomas’ signature recording was “Raindrops Keep Fallin’ On My Head,” a No. 1 pop hit and an Oscar winner for best original song as part of the soundtrack to one of the biggest movies of 1969, the irreverent Western “Butch Cassidy and the Sundance Kid.” Thomas wasn’t the first choice to perform the whimsical ballad composed by Burt Bacharach and Hal David; Ray Stevens turned the songwriters down. But his warm, soulful tenor fit the song’s easygoing mood, immortalized on film during the scene when Butch (Paul Newman) shows off his new bicycle to Etta Place (Katharine Ross), the girlfriend of the Sundance Kid (Robert Redford).

“Raindrops” has since been heard everywhere from “The Simpsons” to “Forrest Gump” and was voted into the Grammy Hall of Fame in 2013. But, at first, not everyone was satisfied. Thomas was recovering from laryngitis while recording the soundtrack version and his vocals are raspier than for the track released on its own. Redford, meanwhile, doubted the song even belonged in “Butch Cassidy.”

“When the film was released, I was highly critical _ how did the song fit with the film? There was no rain,” Redford told USA Today in 2019. “At the time, it seemed like a dumb idea. How wrong I was.”

Thomas would later say the phenomenon of “Raindrops” exacerbated an addiction to pills and alcohol which dated back to his teens, when a record producer in Houston suggested he take amphetamines to keep his energy up. He was touring and recording constantly and taking dozens of pills a day. By 1976, while ?(Hey Won’t You Play) Another Somebody Done Somebody Wrong Song” was hitting No. 1, he felt like he was “number 1,000.”

“I was at the bottom with my addictions and my problems,” he said in 2020 on “The Debby Campbell Goodtime Show.” He cited a “spiritual awakening,” shared with his wife, Gloria Richardson, with helping him to get clean.

Thomas had few pop hits after the mid-1970s, but he continued to score on the country charts with such No. 1 songs as “Whatever Happened to Old-Fashioned Love” and “New Looks from an Old Lover.” In the late 1970s and early ’80s, he was also a top gospel and inspirational singer, winning two Dove awards and five Grammys, including a Grammy in 1979 for best gospel performance for “The Lord’s Prayer.”

Fans of the 1980s sitcom “Growing Pains” heard him as the singer of the show’s theme song. He also acted in a handful of movies, including “Jory” and “Jake’s Corner” and toured often. Recent recordings included “Living Room Music,” featuring cameos from Lyle Lovett, Vince Gill and Richard Marx. He had planned to record in 2020 in Muscle Shoals, Alabama, but the sessions were delayed because of the pandemic.

Thomas married Richardson in 1968, and had three daughters: Paige, Nora and Erin. He and his wife worked on the 1982 memoir “In Tune: Finding How Good Life Can Be.” His book “Home Where I Belong” came out in 1978 and was co-authored by Jerry B. Jenkins, later famous for the million-selling “Left Behind” religious novels written with Tim LaHaye.

Besides music, Thomas loved baseball as a kid and started calling himself B.J. because so many Little League teammates also were named Billy Joe. By his teens, he was singing in church and had joined a local rock band, the Triumphs, whom he would stay with into his 20s. He enjoyed Ernest Tubbs, Hank Williams and other country performers his parents liked, but on his own he was inspired by the soul and rhythm and blues singers he heard on the radio or saw on stage, notably Jackie Wilson, whose hit ballad “To Be Loved” Thomas later covered and adopted as a kind of guide to his life.

“I was raised in a fairly dysfunctional situation and I went through years of intense alcoholism and drug addiction so the song was always a touchstone for me. When you open yourself up to drugs and alcohol at such a young age it becomes something you have to deal with the rest of your life,” he told the Huffington Post in 2014.

“What a road block and heartbreak and times of failure these addictions have caused me. But I had that little piece of lightning from that song. That’s the essence of the whole thing. To love and be loved. And that takes a lifetime to accomplish. It’s always been an important part of my emotions.”