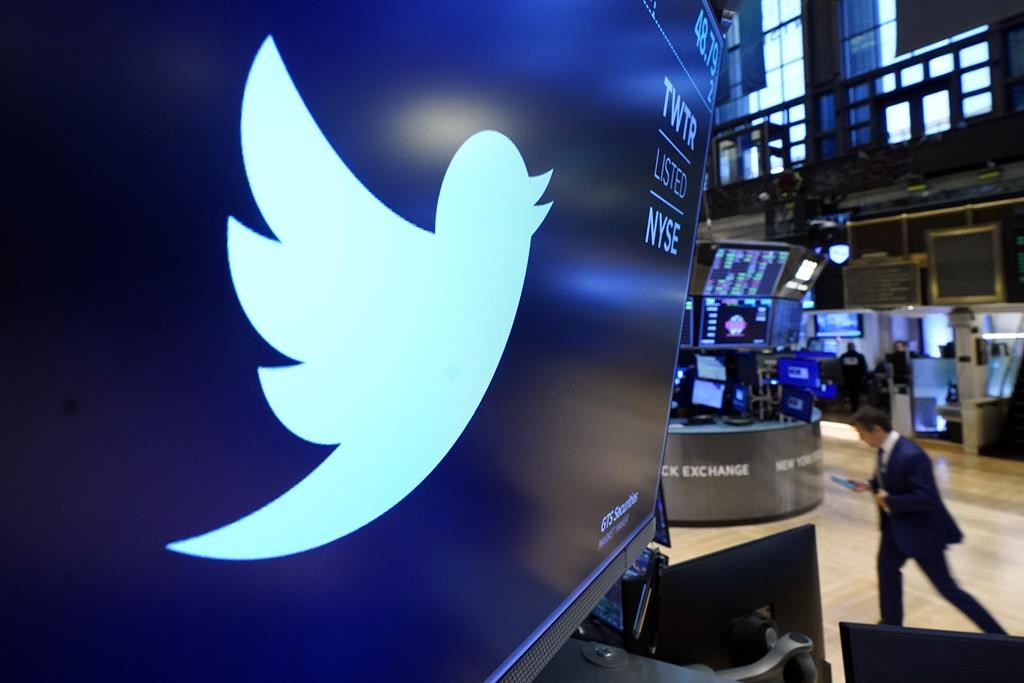 The logo for Twitter appears above a trading post on the floor of the New York Stock Exchange, Monday, Nov. 29, 2021. British Columbia's highest court has upheld an earlier ruling from the B.C. Supreme Court allowing a prominent businessman and philanthropist's defamation lawsuit against Twitter Inc. to proceed in the province. THE CANADIAN PRESS/AP-Richard Drew.

British Columbia’s highest court has upheld a lower-court ruling allowing a prominent businessman and philanthropist’s defamation lawsuit against Twitter Inc. to proceed in the province.

The decision released Friday by the B.C. Court of Appeal means the lawsuit filed by Frank Giustra, a member of the Order of B.C. and founder of Lionsgate Entertainment, may go ahead in the province where he lives.

Giustra’s statement of claim filed in April 2019 alleged that he faced a targeted attack on Twitter by a group who set out to vilify him for political purposes starting in early 2015, including numerous tweets linking him to a debunked child sex trafficking conspiracy theory known as “pizzagate.”

Twitter had filed an application asking the B.C. Supreme Court to decline jurisdiction in favour of California, where the company is headquartered.

The company did not immediately respond to a request for comment on the ruling, which did not deal with the substance of the lawsuit, and none of Giustra’s allegations have been proven in court.

The B.C. Supreme Court ruled in January that Twitter had failed to establish California as a more appropriate forum for the case and noted that Canadian law has established that internet defamation takes place where the statements are read.

The Appeal Court upheld that decision, with the written reasons saying the presumptive jurisdiction of B.C. courts to try Giustra’s claim is “clear and uncontested” and Twitter had failed to rebut that presumption.

Twitter would not be liable for the tweets under U.S. law, the ruling notes.

Giustra sits on the board of the Clinton Foundation, a non-profit organization founded by former U.S. president Bill Clinton, and his statement of claim alleged the defamatory tweets escalated during the 2016 U.S. election.

Twitter said in its application to the lower court that it took action after Giustra sent letters and emails requesting the removal of certain tweets.

The company said that as of late June 2019, most of the 98 tweets at issue in Giustra’s claim were removed and unable to be viewed in Canada.

Of the 18 tweets that remained on the platform, eight were blocked in Canada but were accessible outside of the country, it said.

Twitter also said it provides a “platform for expression” and none of the tweets at issue in Giustra’s claim were written or posted by the company.