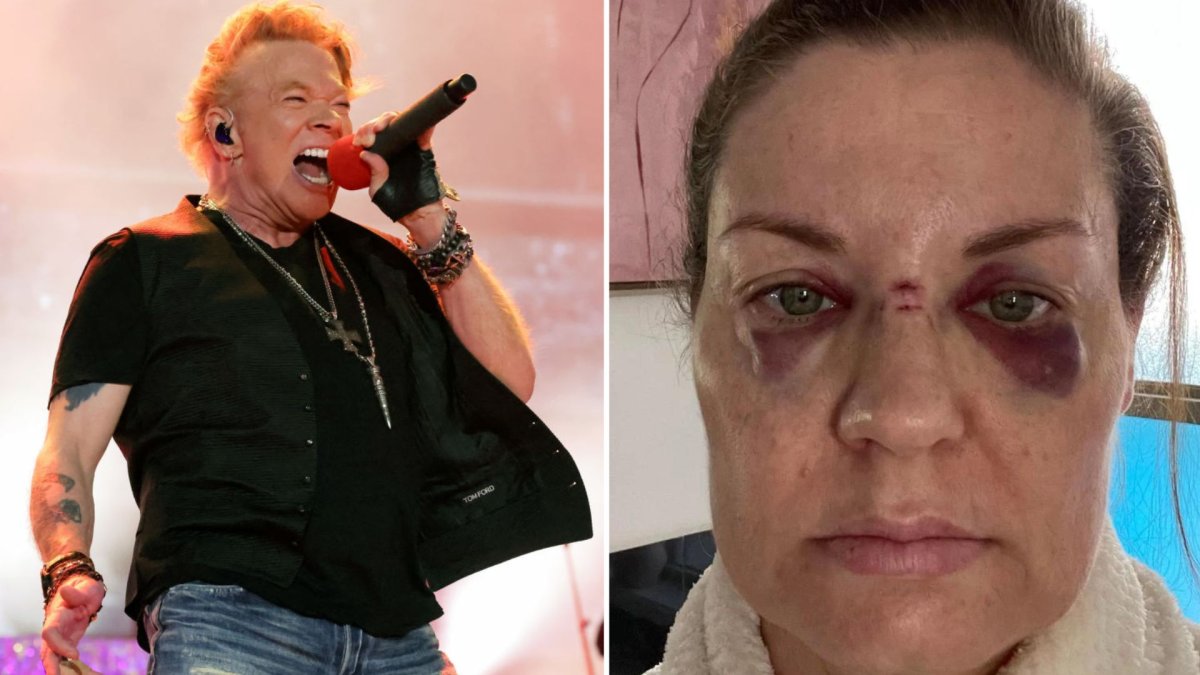 An Australian woman claimed she was injured at a Guns N' Roses concert in November when she was allegedly hit in the face with a microphone thrown by front man Axl Rose.

Hopeful fans looking to catch a piece of Guns N’ Roses concert memorabilia may be disappointed to learn that Axl Rose is ending his microphone-toss tradition.

Rose’s decision to stop throwing his microphone into the crowd during the band’s concerts — which he has done for more than 30 years — came after a woman in Adelaide, Australia, was reportedly injured at a show in November.

According the Adelaide Advertiser, Rebecca Howe had been standing close to the stage during the concert on Nov. 29. Howe claimed when Rose tossed his microphone into the crowd following the band’s last song, Paradise City, the device hit her in the face.

Rebecca Howe claimed to have been hit in the face with a microphone thrown by Axl Rose at a Guns N’ Roses concert in Adelaide, Australia in November 2022.

Howe told the Adelaide Advertiser that she thought her face had “caved in” from the blow. She claimed that if the microphone had hit her in the temple, it “could have killed me.”

“If true obviously we don’t want anyone getting hurt,” wrote Rose.

Rose wrote that most Guns N’ Roses fans are aware of the microphone-throw tradition and look forward to the opportunity to catch it when tossed into the crowd.

“Regardless in the interest of public safety from now on we’ll refrain from tossing the mic or anything to fans during or at r [sic] concerts,” he wrote. Story continues below advertisement

Rose concluded by thanking all of his fans “for understanding.”

On social media, several Guns N’ Roses fans mourned the end of the concert tradition. Several dedicated concertgoers asked Rose to keep throwing his microphone anyway, despite the possibility that someone could get hurt.

I have always been excited for that mike throw. Unfortunately, I was generally too close to the stage and never got the chance to catch it. Sorry to hear it won’t happen again. Love you guys!

IT WASN'T YOUR FAULT! Please don't end the tradition, keep playing the microphone, thousands of fans dream of catching it one day. We love and support u! ❤️🌹pic.twitter.com/av65D2tqML

August 5, 2021 was one of the greatest days/nights of my life because of the epic @gunsnroses concert and I caught your mic at the end. I still have it. Totally sucks that u won't be tossing your mic anymore. 🤘🏽🤟🏽

It remains to be seen if Rose will stay true to his word for the rest of the band’s tour.