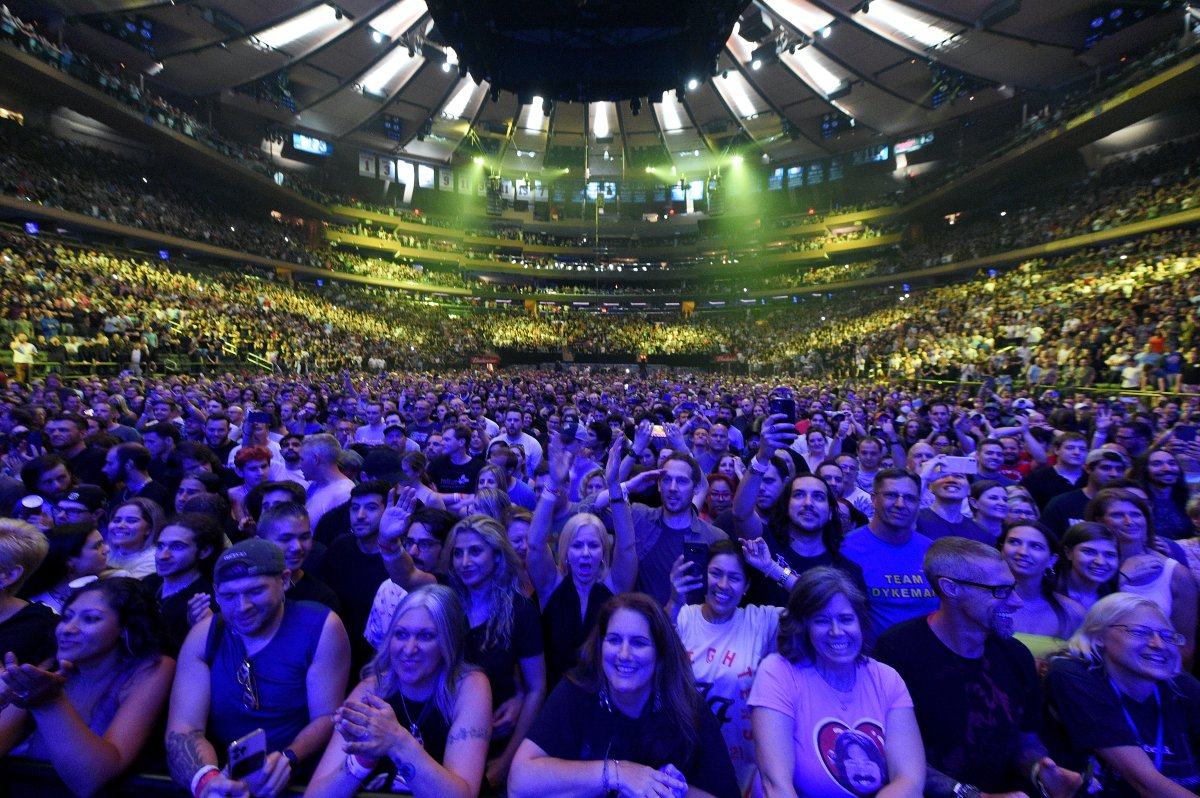 Fans in the audience react as the Foo Fighters reopen Madison Square Garden on June 20, 2021 in New York City.

For the first time since COVID-19 decimated the live concert industry, New York City’s iconic Madison Square Garden was filled to 100 per cent capacity on Sunday night for a Foo Fighters show.

The rockers played a long and animated set; concertgoers raved about the three-hour runtime, especially since it’s been about one-and-a-half years since anyone has been able to see a live performance on such a grand scale.

The Foo Fighters invited surprise guest, comedian Dave Chappelle, up on stage, where he sang Radiohead’s Creep along with the band.

Read more:
Movies are scoring higher and higher on Rotten Tomatoes — but why?

Earlier on in the show, Foo Fighters drummer Taylor Hawkins switched places with the band’s singer, Dave Grohl, for a cover of Queen’s Somebody to Love. The band also covered the Bee Gees’ You Should Be Dancing, a little taste of what’s to come — the band plans to release a disco album in the near future (yes, you read that correctly).

The concert was the first in more than 15 months that had no mask requirement, no social distancing protocol or capacity caps, and all concertgoers had to provide proof of full COVID-19 vaccination.

Fans posted photos of the concert to social media, showcasing the crowd size and expressing euphoria at being able to attend a packed show again. Many also used the opportunity to encourage others to get the COVID-19 vaccine.

In case you wanted to see tens of thousands of fully vaccinated people all in one place. 🤘🏻 #foofighters #MSG #NYC pic.twitter.com/w4qlilKaOs

Fully Vaccinated = @foofighters opening up #NYC to a sold out crowd at Madison Square Garden for 3 hours!!!What a show! First live show in a year and half pic.twitter.com/PA30bdASDW

June 20th 2021, reopening of the Garden for a sold out fully vaccinated Foo Fighters show, and Dave Chappelle shows up for a rendition of my favorite song Creep by Radiohead. It can’t get better than this, take all my money https://t.co/gi8LrLSAoA pic.twitter.com/0fE9S8scUd

A small group of anti-vaccination protesters gathered outside Madison Square Garden before the show, saying it was unfair for those who choose not to get vaccinated.

New York governor Andrew Cuomo announced in May that venues in the state can fill to 100 per cent capacity if all attendees are fully vaccinated.

The concert was confirmed at the beginning of June.

“We’ve been waiting for this day for over a year,” Grohl said in a written statement at the time. “And Madison Square Garden is going to feel that HARD.”

Grohl certainly lived up to that promise.