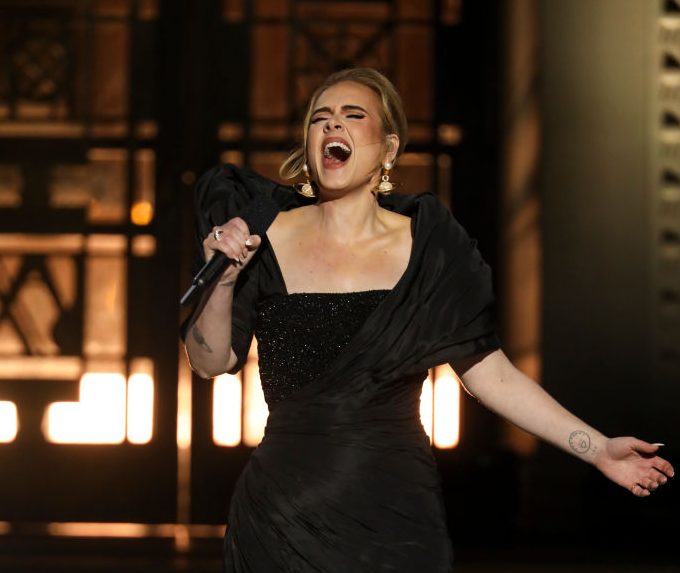 Adele appears onstage during the 'Adele One Night Only' special.

An onstage reunion with a teacher she hadn’t seen since she was a pre-teen brought Grammy Award-winning singer Adele to tears, as the pair were reunited face-to-face for the first time in more than 20 years.

The touching moment happened during ITV’s pre-recorded concert special, An Audience with Adele, which aired in the U.K. on Sunday night. (You can watch the video in the embedded tweet, below.)

During the star-studded event, Hollywood actor Emma Thompson stood up to ask Adele, 33, whether there was anyone from her past who played a tremendous role in her life.

“When you were younger was there someone who kind of supported you or inspired you or… protected you from all the trials and tribulations of life, and inspired you to go on?” the actor enquired.

We all have that one teacher who changed our life… such a beautiful reunion! ❤️

The singer shared that her high school English teacher, Ms. McDonald, really inspired her love of language and helped shape her lyric-writing talent.

“She was so bloody cool. So engaging,” Adele added, sharing that McDonald often wore sequins and gold bracelets and liked to lead street dances in the school’s canteen.

“She really made us care, and we knew that she cared about us.”

The pop singer then broke down in tears as McDonald emerged from the crowd and made her way up on stage, to cheers from the audience.

Adele and Ms. McDonald share a few tears during their onstage reunion.

“I’m so proud of you,” McDonald said, as the pair embraced and shared a brief, but sweet, reunion.

“Now I’ve got to get my whole face re-done,” the star laughed as she wiped away tears.

“I’m so happy you’re here,” Adele told McDonald as she hugged her goodbye. “I’ve still got all my books from when you were my teacher.”

She later shared her joy with fans, posting about the evening on Twitter.

Home Sweet Home. I’ve always dreamt of doing An Audience With… There was so much love in the room for eachother, it felt like such a gig! Everyone was raucous and bang up for it! And my teacher Ms McDonald was there, it was just heaven ♥️ pic.twitter.com/N1LpkQbeoh

“Home Sweet Home. I’ve always dreamt of doing An Audience With… There was so much love in the room for each other, it felt like such a gig! Everyone was raucous and bang up for it! And my teacher Ms. McDonald was there, it was just heaven,” she shared, capping the tweet with a heart emoji.

Adele just released her newest album, 30, this month, which captured almost 60.7 million streams on its first available day on Spotify.

Spotify announced over the weekend that it was going to remove the shuffle button as the default option when playing artist albums after Adele tweeted to the service that tracks are intended to play in the order artists choose.

“We don’t create albums with so much care and thought into our track listing for no reason,” the singer tweeted.

“Our art tells a story and our stories should be listened to as we intended. Thank you Spotify for listening.”

The streaming service replied, “anything for you.”

A Spotify spokesperson told BBC News that the feature has been “long requested by both users and artists.”