A pandemic bright spot: Sales of vinyl records have exploded in Canada 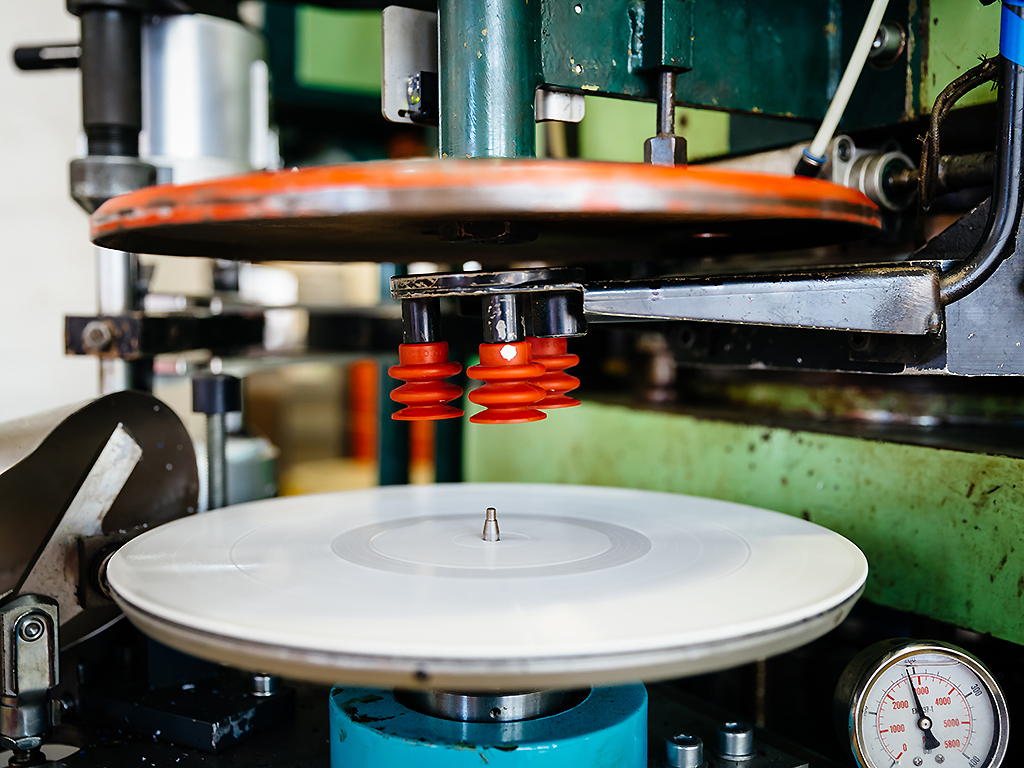 Close-up shot of a pressing machine for vinyl records.

After the annus horribilis that was 2020, it probably came as no surprise to Canadian music lovers that sales of vinyl records took a dive over those 12 months.

When the official year-end numbers were tallied by MRC Data, sales of vinyl in Canada were down by 12.9 per cent in 2020. This was the first decline in vinyl’s fortunes since the beginning of the format’s resurrection in 2008.

READ MORE: Tired of collecting normal vinyl records? Alan Cross has some abnormal options for you

Some vinyl fans — including me, by the way — were afraid that the era of the LP was once again over. And there was plenty of blame to go around.

COVID-19 had to be a culprit, of course, with lockdowns, closed stores, and music fans stuck at home. Streaming was far more convenient and cheaper. On-demand audio streams increased by 16.1 per cent over 2019 to more than 88 billion.

Consumers continued to shun CDs with sales falling by 48.4 per cent for the year. Vinyl seemed to be caught in the same downdraft.

Fingers were pointed at record labels for charging way too much for new releases. Who in their right mind would charge $35 or more for a single vinyl album? The same album on CD cost less than half that.

Buying patterns were disrupted when the annual Record Store Day in April was postponed and moved to several other dates later in the year.

By late summer, vinyl sales across Canada were trending a whopping 26 per cent below where they were a year earlier. Multiple Record Store Days, Black Friday, and the Christmas season were able to erase more than half that deficit but we still ended up buying less: 899,931units in 2020 vs. 1,033,582 in 2019.

Was it possible that after more than a dozen years of double-digit, year-over-year growth, the market for vinyl was saturated? Where Canadians were tapping out? It sure felt like it.

At the same time, though, something wasn’t quite right.

While Canada lost ground, vinyl sales continued to rocket higher in both the U.S. and the U.K. In fact, when all the money was added up at the end of the year, revenue from vinyl in those two countries was higher than the amount spent on CDs. There were many rapturous year-end articles marvelling at vinyl’s continued strength with music fans. In Britain, sales were the highest since the early 1990s. American sales were the best since at least 1991. Why would Canada be so different?

It could be that the biggest problem was with the manufacturing pipeline.

In February 2020, there was a fire at Apollo Masters Corp., the California factory responsible for creating 80 per cent of the world’s need for the lacquer masters required for pressing records. Without this vital component, record pressing plants faced tremendous production delays and even completely shutdowns.

READ MORE: Alan Cross on why there could be tough times ahead for the vinyl record business (from February 2020)

The disaster left only one other factory, a much smaller producer in Japan called MDC, to pick up the pieces. Demand was far greater than MDC could meet. Orders started to back up. Shipments of fresh vinyl were delayed many weeks and sometimes many months. Big-volume territories like the U.S. and the U.K. took priority when it came to getting lacquer masters, leaving Canadian pressing plants and record labels to scramble for what they could get.

Deliveries slowed. Inventories dropped. Sales sputtered and fell. Hands were wrung and spirits drooped. It appeared that was all over but the crying.

Except that it wasn’t.

Based on sales stats for the period ending last week, Canadians are gobbling up vinyl again and at a furious rate. MRC Data says that as of the week ending May 6, vinyl sales are up a whopping 62.2 per cent from a year ago. When I first saw that number, it was so big I thought it was a typo. So far this year, 338,529 units have been sold compared with just 208,754 at this point in 2020.

Extrapolating things through the end of the year, vinyl is on track to sell somewhere well beyond 1.2 million units in 2021.

If vinyl prices hold (they will) and CD sales continue to drop (and they’re down 13.8 per cent so far this year), Canada could end up in the same class as the U.S. and the U.K., where revenues from vinyl will exceed that of CDs.

What changed? Again, I’m going to say that it has to do with supply chain issues. After the Apollo fire, the entire vinyl industry assessed the situation and moved to adjust.

The Apollo factory is still offline and won’t be back anytime soon, if ever. But the fire did bring the industry together in the form of a new organization called the Vinyl Records Manufacturers Association of North America (VRMA) which has vowed not to let something like this ever happen again. Some 50 companies from throughout the supply chain are involved with one of their prime goals being to increase the number of North American lacquer production plants.

Another positive change was the use of direct metal mastering (DMM), a technique used by some companies that involves cutting masters into copper plates instead of lacquer. They have been able to pick up some of the slack.

The net result of these two initiatives is that production has increased, shipments to all territories are up, and people are buying again. Turns out the demand in Canada was still there after all.

It looks like 2020 will turn out to be a mere blip in the history of vinyl in Canada. We can all stand down from DefCon 1.