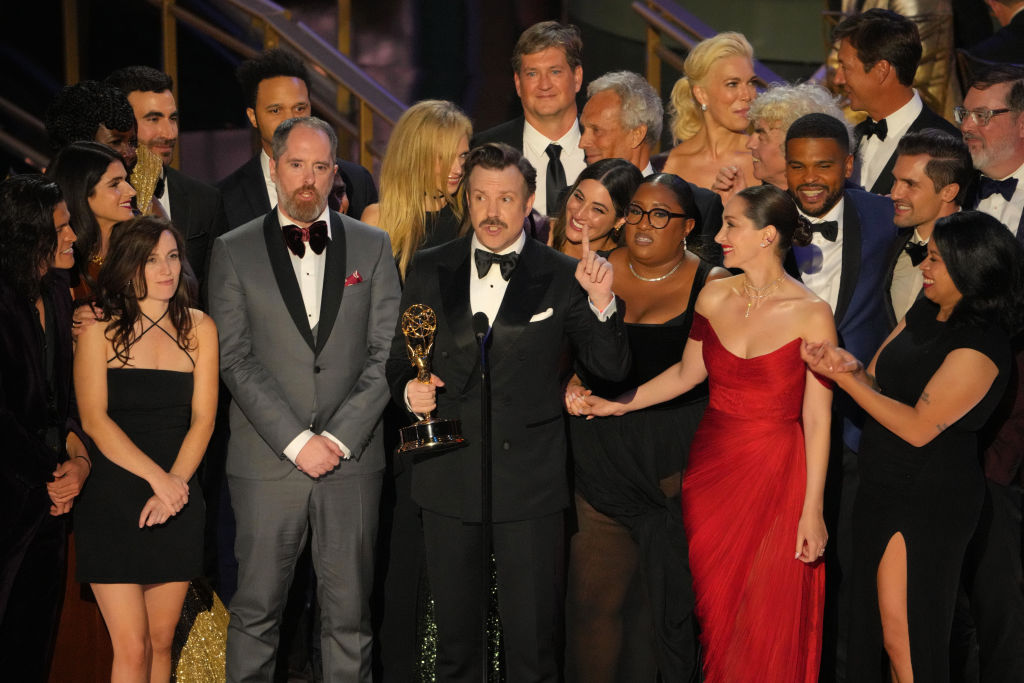 Jason Sudeikis (C) and cast and crew of 'Ted Lasso' accept the Outstanding Comedy Series onstage during the 74th Primetime Emmys at Microsoft Theater on September 12, 2022 in Los Angeles, California.

The HBO drama Succession and comedy Ted Lasso took top honors at the 2022 Emmy Awards in a ceremony that spread its awards between repeat winners and also honored several first-timers.

“Thanks for making such a safe space to make this very difficult show,” said Zendaya, a two-time winner for Euphoria, the drama series about teens and their tough coming-of-age.

Zendaya accepts the award for Outstanding Lead Actress In A Drama Series for “Euphoria” onstage during the 74th Emmy Awards at the Microsoft Theater in Los Angeles, California, on September 12, 2022.

“My greatest wish for “Euphoria’ was that it could help heal people. Thank you for everyone who has shared your story with me. I carry them with me, and I carry them with” her character, Rue, as well, Zendaya said.

The Queen onscreen — the best ‘queen’ cameos in movies and TV

“Thanks to the people who watch this show and dig it as much as we dig making it,” he said.

The 2022 Emmy Awards ceremony, recognizing the best of television, bucked tradition by airing on a weeknight but still celebrated TV’s top shows in a typical three-hour runtime. Host Kenan Thompson of Saturday Night Live brought his distinct humour to the show in his first time as emcee.

Producers took a page from last year’s scaled-down ceremony and its club-style table seating for nominees.

“They had a ball. They had a party. They celebrated themselves,” said executive producer Ian Stewart, recalling a comment made by actor Sophia Bush at the evening’s end: “Oh, my God, I actually had fun at the Emmys.”

The tables were back and were again reserved for nominees — and their “significants,” Stewart said — but there were some 3,000 other guests seated traditionally in the temporarily reconfigured 7,000-seat Microsoft Theater in downtown Los Angeles.

Early arrivals on the show’s gold carpet struck a fun, upbeat tone despite temperatures being in the 80s with unseasonable humidity in downtown Los Angeles.

Thompson kicked off the show with a tribute to TV, dismissing TikTok as “tiny vertical television,” and a musical number saluting series’ theme songs from Friends to The Brady Bunch to Game of Thrones.

Once the music stopped, Thompson provided a mic drop moment, announcing Oprah Winfrey as the first presenter. Winfrey strutted onto the stage holding an Emmy statuette, declaring the night “a party!”

Oprah Winfrey on stage the 74th Primetime Emmy Awards at the Microsoft Theater on Monday, September 12, 2022.

Ted Lasso took a dark turn and ended up with another bright shining Emmy.

The Apple TV+ series starring Sudeikis as the fish-out-of-water coach of an American football team managing a soccer club in England focused on mental health and its characters’ pain in its second season, and was rewarded for it by Emmy voters.

Ted Lasso beat out competitors including Barry, Hacks, Curb Your Enthusiasm, The Marvelous Mrs. Maisel, Abbott Elementary, Only Murders in The Building and What We Do in the Shadows.

When Lizzo herself accepted the award for best-competition series trophy for Lizzo’s Watch Out for the Big Grrrls, she offered another emotional pep talk.

“When I was a little girl, all I wanted to see was me in the media. Someone fat like me, Black like me, beautiful like me,” the music artist said.

US singer-songwriter Lizzo (R) accepts the award for Outstanding Competition Program for “Lizzo’s Watch Out For the Big Grrrls” onstage during the 74th Emmy Awards at the Microsoft Theater in Los Angeles, California, on September 12, 2022.

Find a complete list of the nominees in the major categories, below.
—

Abbott Elementary
Barry
Curb Your Enthusiasm
Hacks
The Marvelous Mrs. Maisel
Only Murders in the Building
** WINNER: Ted Lasso
What We Do in the Shadows

Sheryl Lee Ralph, winner of the Outstanding Supporting Actress in a Comedy Series award for ‘Abbott Elementary,’ poses in the press room during the 74th Primetime Emmys at Microsoft Theater on September 12, 2022 in Los Angeles, California.

US singer-songwriter Lizzo (R) accepts the award for Outstanding Competition Program for “Lizzo’s Watch Out For the Big Grrrls” onstage during the 74th Emmy Awards at the Microsoft Theater in Los Angeles, California, on September 12, 2022.

To see a list of all the Emmy Awards, please visit the official Emmys site.

— With files from the Associated Press