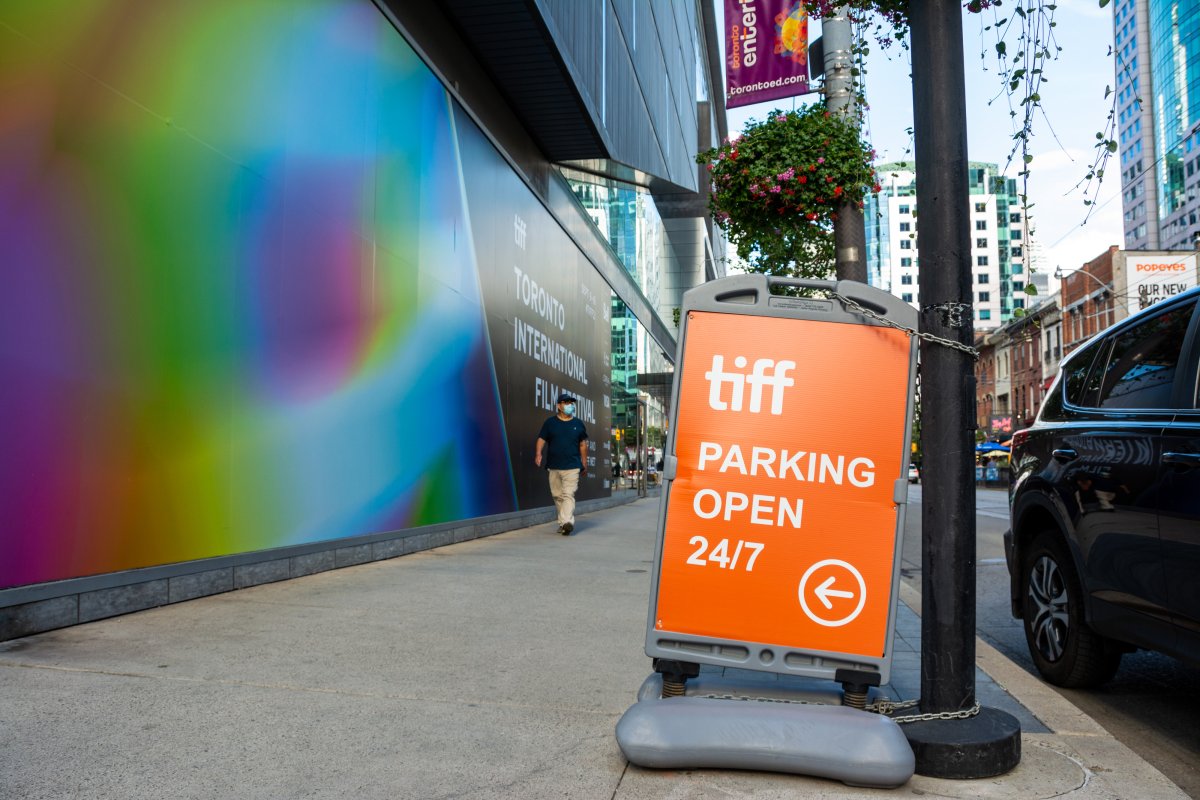 A person wearing a mask is seen walking in front of the TIFF Bell Lightbox and the TIFF parking garage sign on the first day of the 2021 Toronto International Film Festival (TIFF) where in the past a large line up will fill the space with movie goers waiting for the movie screening in Toronto on September 9, 2021.
THE CANADIAN PRESS IMAGES/Dominic Chan.

TORONTO — The stars are once again migrating north for the Toronto International Film Festival, which organizers say is set to return to its pre-pandemic glory days when it begins next week.

With a slate of roughly 200 features, the options range from the indie arthouse to Oscar bait to big-budget crowd pleasers.

Steven Spielberg makes his TIFF debut with what’s being described as his most personal film yet. In the vein of “Roma” and “Belfast,” “The Fabelmans” is an auteur filmmaker’s retelling of his own childhood. Spielberg puts to film his adolescence in midcentury Arizona, charting the family conflict that shaped him. Michelle Williams and Paul Dano star as Sammy Fabelman’s parents, while Seth Rogen takes on the role of a close family friend.

Glass Onion: A Knives Out Mystery

Detective Benoit Blanc returns to TIFF to solve another mystery _ this time, in a Netflix Original set in Greece. Rian Johnson’s “Knives Out” made waves when it premiered at TIFF in 2019, and went on to become a critical and box office hit. Three years later, Daniel Craig and his southern drawl are back, starring alongside Edward Norton, Janelle Monae and Kate Hudson.

The Brendan Fraser renaissance is in full swing. The Canadian-American actor stars in Darren Aronofsky’s latest movie, for which he will also receive TIFF’s Tribute Award for Performance. “The Whale” is based on a play about a 600-pound man’s efforts to reconnect with his estranged teenage daughter, portrayed in the movie by up-and-comer Sadie Sink. Aronofsky is no stranger to TIFF, having shown “Mother!” and “Black Swan” at the festival, and his films tend to generate a lot of buzz — and Twitter discourse.

Clement Virgo’s adaptation of David Chariandy’s award-winning novel about two Trinidadian-Canadian brothers growing up in Scarborough, Ont., is one of the buzziest Canadian titles at the festival this year. Set in the 1990s hip hop scene, the film is a stunning portrait of Toronto’s eastern borough, says TIFF CEO Cameron Bailey.

Canadian filmmaker and actress Sarah Polley sits in the director’s seat in this adaptation of Miriam Toews’ novel about the women in a secluded religious community reckoning with an epidemic of abuse. The cast includes Frances McDormand, Rooney Mara and Jessie Buckley, who was nominated for an Oscar last year for her role in “The Lost Daughter.” This is Polley’s first feature film in almost a decade.

Harry Styles stars in this film based on the novel by Bethan Roberts about forbidden love in the 1950s. Styles plays Tom, a policeman who marries Marion but falls for Patrick, a museum curator. The trio try to navigate this delicate love triangle, but its ramifications affect them for decades to come. TIFF has already announced the whole cast is receiving a Tribute Award for Performance.

While the opening slot at TIFF has historically been seen as a bit of a curse _ consider, for instance, the critical pan of “Dear Evan Hansen” last year, and the fact that 2017’s “Borg vs. McEnroe” and 2018’s “Outlaw King” failed to make a splash. But Bailey says “The Swimmers” is worth your time. Based on the true story of Yusra and Sara Mardini, two sisters who fled the war in Syria for Europe and ended up with a chance at competing in the Olympics. Director Sally El Hosaini has been selected for the TIFF Tribute Award for Emerging Talent.

On the Come Up

Actor Sanaa Lathan’s feature directorial debut is based on the novel by Angie Thomas, who also wrote “The Hate U Give.” “On the Come Up” follows Bri, a high schooler who wants to become a rap star and live the dream her father never got the chance to realize. Thomas’s novels are critical hits, but much of the buzz of this film surrounds the fact that Lathan _ who is best known for her starring role in “Love & Basketball” _ is directing.

Canadian-American actor Luke Macfarlane is a regular in made-for-TV Hallmark Channel romance movies, but he’s making the leap to a big-screen rom-com with “Bros,” co-written by his co-star, Billy Eichner. This gay rom-com, directed by Nicholas Stoller and produced by Judd Apatow, follows a big-city podcast host (Eichner) as he falls in love with a small-town lawyer (Macfarlane) in New York City.

This Roku Channel production promises to spoof rock star biopics in much the same way Weird Al parodies their songs. It stars Daniel Radcliffe as Yankovic, and charts his rise to fame. Rainn Wilson, Evan Rachel Wood and Quinta Brunson round out the cast as Dr. Demento, Madonna and Oprah Winfrey, respectively.